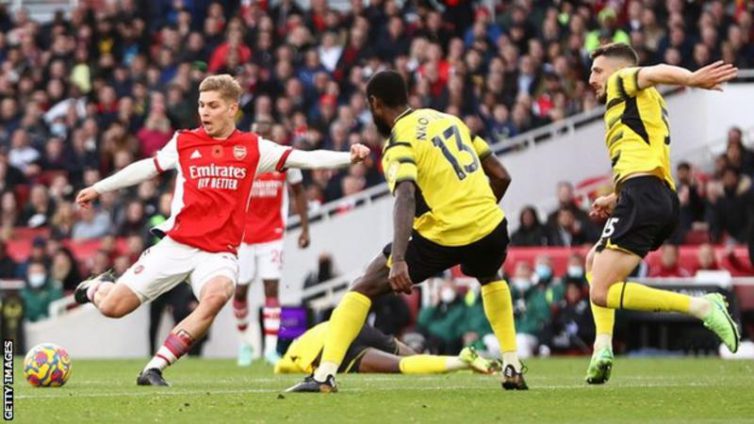 The in-form Emile Smith Rowe scored in a third successive Premier League game, sending Arsenal up to fifth in the table with a low drive from outside the box after 56 minutes.

However, prior to the goal Watford had put the ball out of play due to an injury and the hosts chose not to return possession from the resulting throw-in.

“When we put the ball out voluntarily, everyone expects [the opponent] to give the ball back to you but there was not that respect from the Arsenal players,” Ranieri told BBC Sport.

Arteta responded: “I would say that we are the most honest team and in some stages we can even become naive.”

The Spaniard added: “If he felt like that towards our club, I have to apologise if that’s the case but I am sure there is no intention to take any advantage.”

Gunners captain Pierre-Emerick Aubameyang had a first-half penalty saved by Ben Foster following a poor challenge by Danny Rose on Alexandre Lacazette – and the Watford goalkeeper produced another fine stop to keep out Gabriel’s header shortly before half-time.

The visitors were fired an early warning when Bukayo Saka had an eighth-minute finish ruled out for offside at Emirates Stadium.

Watford’s first attempt did not arrive until the 40th minute but Joshua King squandered the chance to earn a late point, shooting into the side-netting after pouncing on a mix-up between Aaron Ramsdale and Ben White.

Ranieri’s afternoon was made worse by Juraj Kucka’s late dismissal for a second yellow card late on and defeat leaves his side 17th, two points above the relegation places.

At the end of a week in which three Premier League bosses have lost their jobs, Arsenal appear to be reaping the rewards for standing by Arteta following a disappointing start to the campaign.

An eighth-placed finish last term was followed by three successive defeats at the start of this season but the Gunners, unbeaten in 10 matches in all competitions, have real momentum going into the international break.

Aubameyang endured a frustrating afternoon and should have put away the initial chance prior to Saka’s disallowed goal, before seeing his spot-kick saved after Rose had needlessly wiped out Lacazette.

The Gabon international was also ruled offside in getting a boot to Martin Odegaard’s goal-bound shot as Arsenal were unable to extend their advantage, however the hosts were rarely troubled.

Making his second league start of the season in the absence of the injured Thomas Partey, Ainsley Maitland-Niles effectively commanded the midfield alongside Albert Sambi Lokonga while Saka tormented left-back Rose throughout.

But it required a moment of quality from Smith Rowe to end Watford’s resistance and the England Under-21 international, omitted from Gareth Southgate’s latest senior squad, now has five goals in his last eight games in all competitions.

Kucka’s long-range effort after 85 minutes stood as Watford’s sole attempt on target and things do not get any easier for the Italian’s struggling side, with fixtures against Manchester United, Leicester City, Chelsea and Manchester City to come after the international break.

DISCLAIMER: The Views, Comments, Opinions, Contributions and Statements made by Readers and Contributors on this platform do not necessarily represent the views or policy of Multimedia Group Limited.
Tags:
Arsenal FC
Claudio Ranieri
Mikel Arteta
Watford