Come July 23, everything will fall in place – Dogboe 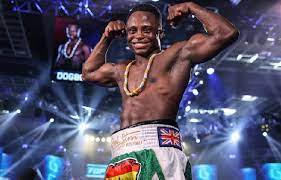 It’s normal to hear a boxer predict victories of varied forms ahead of a fight and that is the case of Ghana’s former world titlist Isaac ‘Royal Storm’ Dogboe, as his lenses zero in on his July 23 date with Joet Gonzalez in Minnesota. But what gives him such a big conviction?

The Ghanaian has been successful so far since moving up to the 126 kg division having scored three victories and considering that he has tasted the golden roses of world championship already, the confidence is sky-high. On November 20 last year he scored a majority decision against Christopher Diaz. Before that, he had defeated Adam Lopez also via a majority decision almost 11 months after he stopped Chris Alvalos in Las Vegas.

The complex nature of this upcoming fight is that Gonzalez, who is hungry for first-time word title status, only needs to defend his WBO International featherweight successfully against Dogboe to assume a number 1 contender accolade, then ready for a crack at the main title. The Ghanaian Olympian from 2012 also has the desire to regain status quo and has two valuable lessons taught him by the current WBO champion Emmanuel Navarette.

“I have changed my mentality about getting knockouts. He is equally hungry as I am. He wants it, maybe I want it more. In the end it’s about who can adapt and who has energy left in the tank. That’s the most important thing right now. You can train and everything but if God’s hand is not in it nothing will happen,” Dogboe told Joy Sports.

Under the strict supervision of Barry Hunter, Dogboe is sure he has become a sharper boxer having won all bouts in the featherweight division so far. However, Dogboe’s act in the ring has to assume the skin of the likes of Mike Tyson who made their relative

“At the end of the day he (Gonzalez) is a tall guy and the simple thing, one can do is to bring tall sparring partners for me to work with. That had been done. But then we are not just going there to fight. It comes with the education and the fundamentals and the things I wasn’t doing before. Now we have to focus on the little things. Before, they used to say ‘Isaac Dogboe doesn’t use his jab’. We are working on things and come July 23 everything will fall in place.”

Joet Gonzalez has one big bug that has troubled him to date and that is the inability to meet the demands of the big dates. When he faced Shakur Stevenson in the WBO featherweight championship, he lost by a majority decision. This was after he had recorded 23 straight wins. On the occasion when he met the dreaded Navarette as well he couldn’t halt the champion.

So for Gonzalez, July 23 is a day for the big blunders of the big dates to be brought to an end as he is more than hungry to get it right on the possible third count. Whether or not he will get the opportunity will be determined in the ring. The 15 KOs in his 25 wins make him a worthy opponent for this big clash to determine who makes it.

Already the post-fight dimensions and motivation are two-prong. The first obvious ones is that of the winner of the big one between current WBO champion Emmanuel Navarette v Edwardo ‘El Gemelo’ Baez on August 20 at the Pechanga Arena in San Diego. The other is that of WBC Champion, Mark Magsayo or Rey Vargas.