I asked my new trainers to push me hard and they do – Dogboe - MyJoyOnline.com 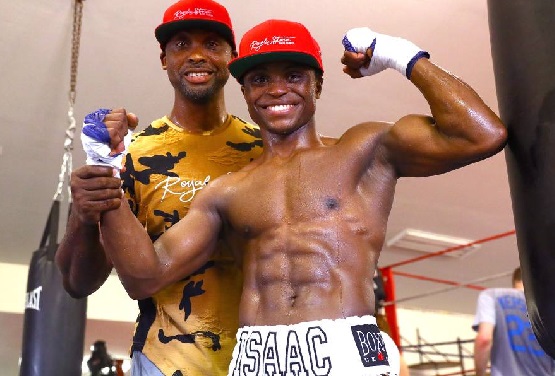 Dogboe eventually settled with Barry Hunter and Patrice Harris after severing a previous relationship with the legendary Freddie Roach only days after it started.

Dogboe, who is currently ranked number eight on the WBC Super bantamweight rankings, is currently on break from training due to the Covid-19 outbreak.

The boxer, who is in his early 20s was previously handled by his father Paul with whom he won his WBO title. Paul Dogboe is still on his team as a manager.

“We had discussed it so I was ready. When I got there the first thing I told them was that I was ready and going to give them my time.

All I needed from then was to have them push me and work me as hard as they can. Your intention is to try to make me quick in training. I will always be here just call me and I will respond”

According to Isaac Dogboe, the coaches were responding to him and vice versa enabling some good bonding over a relatively short period.

“It felt like people I had worked with for a very long time,” he said.

On the rather brief relationship with Freddie Roach, he said; “everything is down to consistency.

Freddie is a great guy regardless of whatever transpired and what he said about me. It is what it is. I cannot take anything away from him.”

All I can do is to be happy where I am at the moment and glad to be working with Patrice and Barry.”

Paul Dogboe left the British army years ago to focus on his son’s talent and its further development. His strict supervision and establishing high standards of discipline got his son well adapted to hard training hard.

It was a long journey of preparation, promotion of bouts and courting love from the people of Ghana which eventually paid off.

The ex-military man says while he is the best-fit trainer for his son, the new focus is to get others on board so he can focus on other aspects of Isaac’s journey in the sport.

He also revealed that the choice of Freddie Roach hinged on a previous relationship he had with the legendary trainer as well as his pedigree.

“We went to Hollywood and Freddie used to be my friend. Everything was fine but we realized Freddie roach has about 8 serious boxers he is working with.”

“He has his own time and when he does his things and we were looking for someone who would fit into our time. So we looked around and settled on Barry Hunter and Patrice Harris who are great guys.” Paul Dogboe told Joy Sports.

What Patrice Harris brings to the table

For his work, over the years Patrice Harris was recently inducted into the Boxing Hall of Fame. Together with his coaching partner Barry Hunter, Patrice Harris uses VSL Fighting’s HITSTIX  equipment which is known to be effective with varied fighting training.

Conditioning has played a key part in Dogboe’s career and actually saved him from a complete knockout in the second bout against Emmanuel Navarette.

The use of Hitstix is expected to boost the young Ghanaian former champion’s endurance as well as give him some new ring tricks.

The seasoned trainer was named Trainer of the Year by the WBO in 2007 and handles a mixture of amateur and professional boxers including Fernando Guerrero, Anthony Peterson, Lamont Peterson, Raymond Serrano and Tony Thompson.

He is also the head trainer at the Bald Eagle Gym in Washington DC where his boxers are known as the Head Bangers.

This partnership between Barry and Patrice looks good so far.

What remains is to get Isaac Dogboe back to devastating form – good enough to make him a worthy threat to Emmanuel Navarette, WBC champion Rey Vargas and other champions in the division.

Dogboe has also given an indication that he wants to move up to featherweight.