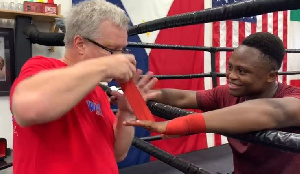 Dogboe is looking to come back stronger from two consecutive defeats to Emanuel Navarrete which saw the Ghanaian losing his WBO title to Mexico’s Navarrete in the process.

The 24-year-old hard-hitting pugilist has joined the camp of Roach who trains legendary Filipino boxer Manny Pacquaio after his father and trainer, Paul Dogboe, quit his role with his son in a move to allow a much-experienced trainer take over.

In an interview with BoxingGhana, Paul confirmed that Dogboe has teamed up with Roach in his famed Wild Card Boxing Club in Hollywood, California.

“Yes, Dogboe is officially at the camp of Freddie Roach”, Paul said in an interview with the website.

The 59-year-old Roach remains one of the best trainers in history of the sport having trained the likes of Manny Pacquaio, Oscar de la Hoya and Mike Tyson with his achievements in the sport earning him a World Boxing Hall of Fame status.