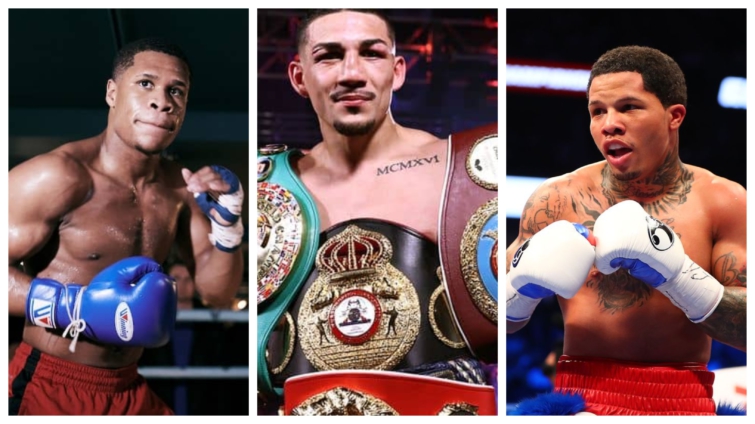 Days after his impressive knockout win against Jackson Marinez, Richard Commey has set his sight on three of the most relevant boxers in the lightweight division.

The 33-year-old seems to go along the lines of the saying “to be the best you must fight the best and craves for a date with either WBA, WBO and IBF champion, Teofimo Lopez, Gervonta Davis the WBA interim champion and Devin Haney the WBC champion.

In a recent conversation with K-Box TV, the New York-based boxer hardly minced his words, “I wanna be a world champion again. Whoever has got the title I want the title. People there have got titles right. So if you have the title you are a target.”

“I want the title. I think with Teofimo he is moving up in weight and he has a fight coming up,” he said.

Commey who wore a look of full recovery from his title loss to Lopez, came in guns blazing in his return bout against Jackson Marinez and delivered a good result – a sixth round knockout with his big right.

“I’m ready to fight anyone at 135. If Teofimo feels he wants to give me a rematch no problem. But I want a title and I want to fight any of them,” he said.

Interestingly, Teofimo Lopez who was responsible for the loss of his IBF title was at ringside to urge him on to victory. The champion also reached out to Commey in the dressing room to wish him well – a gesture many have hailed the American for.

Lopez is still undefeated in 16 fights and holds the WBA WBO and IBF titles. His walk to relevance began with Commey in December 2019 after which he stepped on to the big one with Vasyl Lomachenko. Once again Teofimo delivered a good performance and added Lomachenko’s WBA and WBO to his IBF making him an item of attraction in the division.

Commey’s hint that Lopez could move up in weight could open up opportunities if it is carried out by the American.

Gervonta Davis the interim WBA champion also brings to the table quality and a sweet track record to make him a target. Not only is he unscathed in 24 fights but has won 23 of them by knockouts. The southpaw is a ferocious puncher who has had previous stints with the IBF and WBA super featherweight titles.

Devin ‘The Dream’ Haney holder of one of the WBC title has a smooth run of 25 wins with 15 knockouts. The California-born champion had made a case for himself throughout his journey and rose to the occasion on his 23rd bout which saw him annex the WBC title after handing Russian, Zaur Abdullaev his first defeat at the Madision Square Garden in September 2019.

For now Commey is cooling off and should return to the gym soon with his trainer Andre Rosier, while awaiting what his team at Streetwise Management come up with.