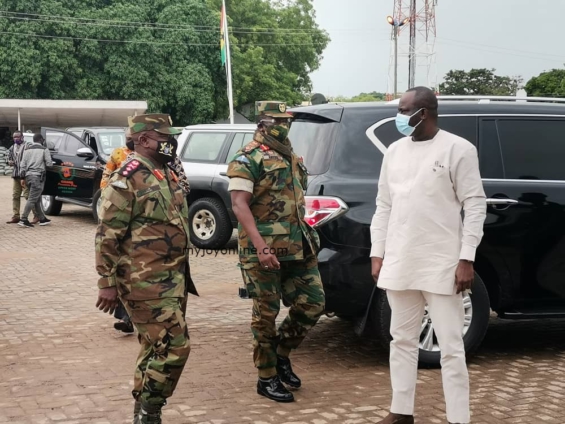 The Committee set up by the Military High Command to look in to circumstances leading to Military personnel brutalising some residents of Wa, started work on Monday.

Activities for day one ended with an interaction between members of the Committee and the Upper West Region’s Director of the National Investigation Bureau.

On Thursday, July 1, some soldiers were captured on video brutalising some residents of Wa in the Upper West Region. The move was allegedly triggered by the theft of a mobile phone supposedly belonging to one of the military officers.

The victims who are mostly commercial tricycle operators, motorists and pedestrians were whipped and made to roll on the bare floor with some forced into gutters nearby.

Several of them are said to have sustained various degrees of injury. Two of them are currently on admission at the Wa Municipal Hospital.

One of the victims, a 29-year-old vulcanizer, Gafur Mahama is suspected to have developed a fracture in his right thigh during the assault.

He has undergone surgery at the Upper West Regional Hospital. Gafur Mahama currently requires the services of an orthopaedic surgeon.

Thirteen people have so far reported to the Wa police alleging that they were assaulted by the Military personnel.

The incident led the high-powered delegation from the Military High Command led by the Chief of Army Staff in charge of Ground Operation, Major General, Thomas Oppong Peprah, to visit Wa to apologize to the overlord of the Waala Traditional Area and the people of Wa for the actions of the soldiers.

Meanwhile, Upper West Regional Minister, Dr Hafiz Bin Salih has assured the people that the Committee will do a thorough job which will ensure that justice is served to all the people who were brutalized.