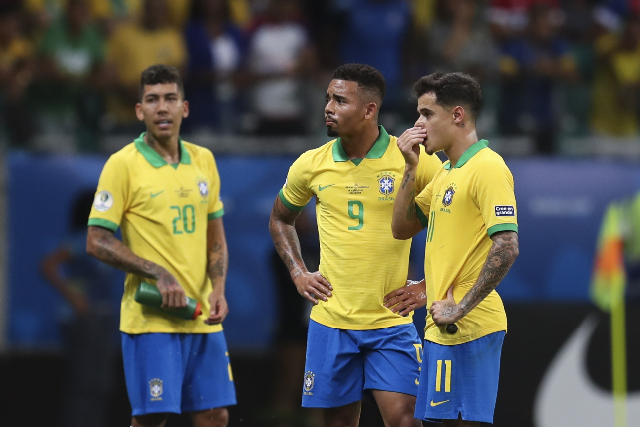 Hosts Brazil had three goals ruled out and were booed off the pitch as they were held to a 0-0 draw by Venezuela in the Copa America on Tuesday.

Philippe Coutinho's late strike looked to have sent Brazil through to the last eight but the video assistant referee, having already denied a Gabriel Jesus effort, showed a foul in the build-up.

Brazil remain top of Group A with four points from two games.

"VAR was correct. I have absolutely nothing to demand. We got justice," Brazil coach Tite said. "They made the right call with both [VAR] goals."

Brazil made hard work of beating Bolivia in their opener and once again struggled for a creative spark against Venezuela, promoting jeers from the home crowd in Salvador at both half-time and full-time.

"We have to understand the supporters, they want to see goals and if I had been in the crowd I also would have wanted to boo us," Tite added.

The hosts enjoyed 75% possession in the first half but managed just one shot on target, much to the delight of Venezuela coach Rafael Dudamel.

"We played an almost perfect game against a team of brilliant individuals," he said, adding: "Long live VAR.

"Today is very important, but this result will mean nothing if we don't qualify from the group."

Venezuela have two points from two games and have realistic hopes of advancing to the knockout stage with their final game coming against Bolivia, who suffered their second straight defeat on Tuesday, losing 3-1 to Peru.