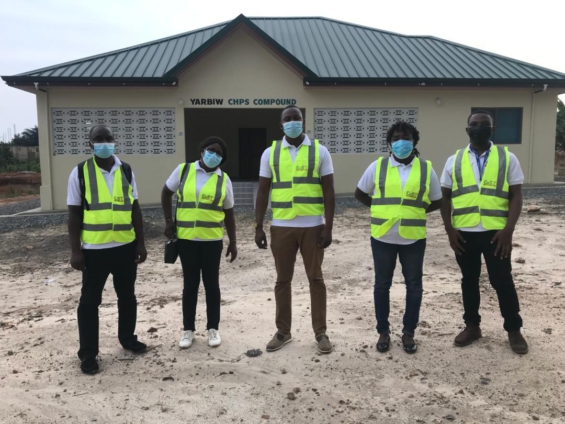 The Chapter of Infrastructure Transparency (CoST) Initiative in Sekondi-Takoradi has paid a working visit to two project sites to ascertain the progress of work.

The projects are the cassava processing factory at Borkor in Axim and a CHPS Compound at Yaabiw in the Ahanta West Municipality, being constructed under the CoST Assurance Process.

The two projects were born out of a community needs assessment to help alleviate poverty among rural women, and improve health care delivery in the host community, respectively.

The Infrastructure Transparency Initiative is an international initiative working globally with national and subnational governments to enhance transparency and value for money in the delivery of public infrastructure.

The project holds a firm belief that by enhancing access to infrastructure data stakeholders would be empowered to hold decision-makers to account.

This would ultimately result in better infrastructure delivery, competitive business environment for the private sector and improve the lives of beneficiaries.

At Axim, the Municipal Coordinating Director, Mr Daniel Essel, said cassava was a key crop among farmers in the area and that investing in the value chain was investing in local economic growth.

The Municipal Planning Officer, Mr Sherrif Rockson said the project would have other ancillary facilities to incorporate all sectors of the cassava value chain.

“Hopefully, we are expecting this facility to become operational in two months,” he added.

Mr Rockson said the facility would improve the livelihoods of about 300 people and envisioned to become a key supplier of cassava products, particularly “akyeke,” the staple food of the area.

The project is under a substantial completion point of 95 per cent.

Meanwhile, the well-constructed CHPS compound at Yaabiw is already operational.

The Municipal Planning Officer, Mr Malcolm Yendaw said the project served more than three communities with a population close to 8000.

He said it had significantly improved the lives of people of the Municipality.

The Manager of CoST at Sekondi-Takoradi, Mr Isaac Aidoo expressed gratitude to the management of the two municipal assemblies for their cooperation during the visit.

He said the CoST Assurance Process was a way of identifying best practices in the delivery of public infrastructure as well as highlighting issues of concern to enable procuring entities to improve infrastructure delivery.