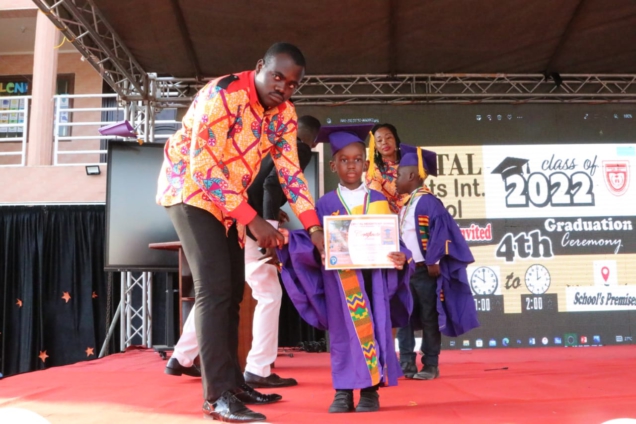 Crystal Heights International School has celebrated the 4th Graduation Day for its pre-schoolers.

The Graduation Day ceremony is a happy and momentous occasion for the little ones as they gathered to celebrate the culmination of their preschool years.

Speaking at the event, the Administrator of Crystal Heights International School, Mr. Mensah Emmanuel Yao, said every milestone in education is worth commemorating and enjoying.

The school, which begun operations 8 years ago, has chalked several successes which the Administrator noted will inure to the national development and modernization.

He said, circular education is not only to build the academic capacity of children but to ensure that they are educated holistically.

This he said has to do with the child’s capacity building innovatively, morally, mentally and spiritually.

He also averred that Education can bring development and modernization that the nation needs.
Mr. Mensah Emmanuel Yao said the school begun with 12 pupils, and 9 teaching staff in 2014 and has currently increased its facilities to include more classrooms, computer laboratory, science laboratory, assembly hall, and 11 school buses.

The population of the school now stands at 1, 104.

The Administrator also revealed that the school has started an SHS program, and is offering five different programs.

The school has also performed spectacular in their five times appearance at the Basic Education Certificate Examination (BECE) as it was adjudged the 2021 best performing school.

According to him, the banner of Crystal Height International School is flying high across the country and that is due to the hard work of both teachers and students.

He expressed appreciation to the teaching and non-teaching staff of the school for being part of the successes chalked over the years.

The Municipal Chief Executive of Asante Akyem North Municipality, Francis Oti Boateng who was the Guest Speaker, commended the performance of the school.

He minced no words in praising the school management for how far they have taken the school; both building the moral and academic faculties of the students.

According to him, government is doing a lot to improve the education system in the country by introducing free SHS and school feeding program.

He also said government is constructing school buildings across the country and much is being done in building the capacities of girls in ICT.

Mr. Francis Oti Boateng said there is the need for government to offer assistance to private institutions like Crystal Heights International school who are doing well to augment government’s efforts in education.

He believes government has plans in place to ensure that private schools in the country are granted some subventions to be able to continue supporting government efforts.