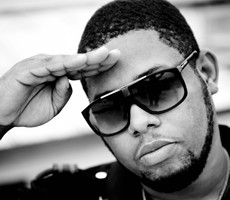 Ghanaian hiphop artiste Desmond Kwesi Blackmore affectionately known on stage as D-Black has struck a deal in Nigeria that will distribute his music in the West African country.

Although the name of distribution outfit that will sell his music, in what is believed to be the biggest music market in West Africa, is being kept secret, a source close to the artiste confirmed to Myjoyonline.com that the deal was finally sealed Tuesday.

D-Black’s manager in Nigeria, Osagie Osarenkhoe is believed to have engineered the deal. Osagie is the CEO of M.etal Music and also the manager of well-known Nigerian artistes, WizKid, Banky W and Skales.

The source said an official announcement of the deal is expected to be made in three weeks time in Ghana when D-Black unveils his latest music video.

When Myjoyonline.com contacted D-Black, he confirmed the distribution deal but remained tight-lipped on the name, only to say we should wait for an official announcement: “When they come to Ghana for my video release … in three weeks time. It will be official then.”

A member of the Peer Pressure Crew and the CEO of Black Avenue Music, D-Black, collaborated with ex-big brother housemate, Kwaku-T to release Target Practice in December 2008.

D-Black’s ‘da Ghana Bwouy’ was recently nominated in the Best International Act category of the 2011 Black Entertainment Television (BET) Awards but Nigerian acts, 2face and D’banj beat him to that award.