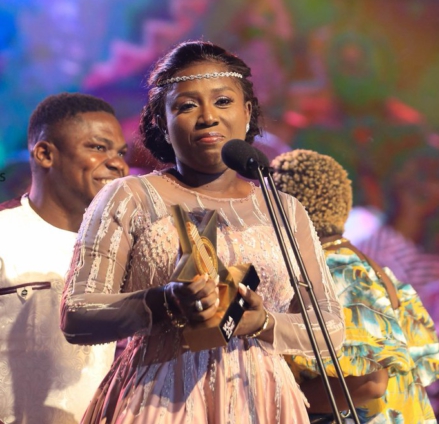 Social media users have been showering praises on gospel artiste Diana Hamilton after she was crowned the Artiste of the Year at the 2021 Vodafone Ghana Music Awards.

The ‘Adom’ hitmaker had to contend with the likes of KiDi, Kuami Eugene, Adina and Sarkodie to win that enviable title.

For scores on social media, her victory was nothing short of miraculous as she combined the grace of God Almighty with hardwork and dedication.

Below are some of the comments on social media;

Diana Hamilton has really done a great work, she deserves it 🥰❤️

Congrats to Diana Hamilton for winning the artiste of the year category. Adom ! #VGMA22

Ah is Diana Hamilton the 1st female musician to win VGMA Artiste of the Year??? Ow wow it must be nice 🙌🙌🙌🙌🙌#VGMA22

As Gospel people were voting for their own to win the Artiste of the Year, Kidi ein people too were at the Nightclub busy buying drinks with their monies, lmao

Just because your fav. artist didn’t win AOTY doesn’t mean it was a cheat.
To be candid, Diana Hamilton really deserve it🥳🎉

Ghanaians usually forget about the fact that every nominee is a prospective winner!
If you did not have anything to say about her nomination, don’t complain about the win ….especially if you didn’t vote for your favorite artist!!!

“So the essence of my praise
Is centered on Your grace”. Adom 🙏🙌🏻 congratulations Diana Hamilton #Diana #Adom #VGMA22 . pic.twitter.com/VNG8HEagdY

Aside from congratulating Diana Hamilton, some section on Twitter has trolled KiDi for being unable to scoop the most enviable award, that is, Artiste of the Year, after picking four awards on Saturday night.

Kidi: Shut Up and Bend over

@KiDiMusic when he heard that Diana Hamilton has won the artist of the year award.🤣🤣🤣. pic.twitter.com/557ArrAKop