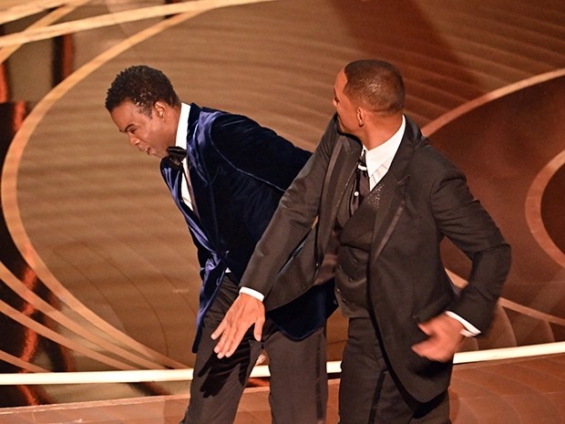 Will Smith smacks Chris Rock at the Oscars. (Rob Latour/Shutterstock)

According to him, Chris Rock clearly made a joke that did not need to evoke the assault he suffered despite the content and the person it was addressed to.

Speaking on Showbiz A-Z, on Saturday, DKB stated that jokes have been made about people with different conditions and never in a way to harm, adding that actor and comedian, Ricky Gervais makes meaner jokes than Chris Rock.

DKB added that “all across the world, big head is a big joke. in Prison Break there were some scenarios where reference to big-headed guys was made and it evoked laughter, so I realise the whole world, they laugh at people with big heads.”

The comedian noted that these scenarios are not different from the joke Chris Rock made nor the jokes other comedians have made about a variety of people.

DKB believes that Will Smith’s action was fueled by his need to prove to his wife and the world that he can also be an Alpha male.

He stated that events of the recent past, including Jada admitting she and musician August Alsina had an “entanglement” were a huge blow to Will.

Hence, he needed to show the world and prove to Jada that he can also be like the Alpha Male rapper Tupac was.

The incident in question occurred in the middle of the 94th annual Academy Awards, as Rock presented the best documentary feature category on stage.

The comedian began riffing about A-list celebrities in the audience before going off-script to make a joke about Smith’s wife, Jada Pinkett Smith and her shaved head. (The actress has alopecia, a medical condition that results in hair loss.)

Smith initially laughed at the jab. But after turning to Pinkett Smith and noticing her epic eye-roll at the joke, he quickly shifted gears and walked on stage to slap Rock in the face. At first, everyone — Rock included — thought the rouse was a bit, but it soon became clear that wasn’t the case.

“Oh, wow,” Rock said as Smith walked off stage. “Wow. Will Smith just smacked the sh*t out of me.”

Once he returned to his seat, Smith yelled, “Keep my wife’s name out your f**king mouth.”

Rock responded, “Wow, dude. It was a ‘G.I. Jane’ joke.” That prompted Smith to shout at a louder octave, “Keep my wife’s name out your f**king mouth!”

Rock appeared visibly shaken on stage and struggled to collect his thoughts. “That was, uh, the greatest night in the history of television,” he offered.

Following his action, The Academy conducted a formal review. They are, among other things, considering numerous disciplinary actions.

Meanwhile, Will Smith has resigned from the Oscars Academy after slapping comedian Chris Rock on stage during last Sunday’s ceremony.

DISCLAIMER: The Views, Comments, Opinions, Contributions and Statements made by Readers and Contributors on this platform do not necessarily represent the views or policy of Multimedia Group Limited.
Tags:
Chris Rock
DKB
Will Smith