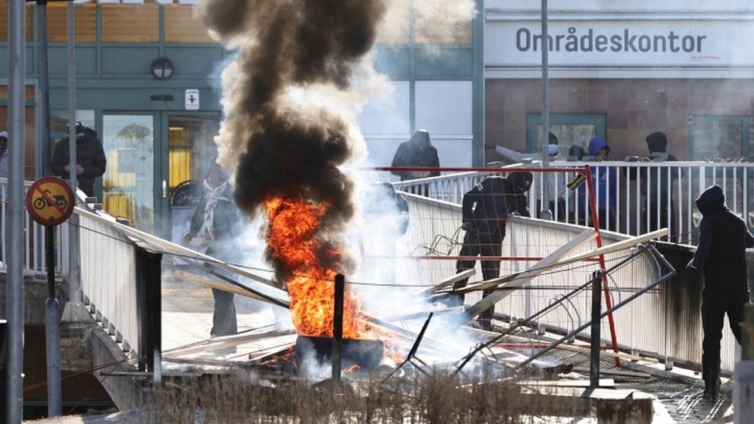 Rioting continued on Sunday in Norrköping

More than 40 people have been arrested after violent clashes in Sweden between police and people angry at plans by a far-right group to burn copies of the Quran.

The violence was sparked by a series of rallies organised by the Danish-Swedish politician Rasmus Paludan.

He says he has burned a copy of Islam’s holy book and wants to do so again.

Muslims consider the Quran the sacred word of God and view any intentional damage or show of disrespect towards it as deeply offensive.

Saudi Arabia has condemned what it called the “deliberate abuse of the holy Quran by some extremists in Sweden, and provocation and incitement against Muslims”.

Sweden’s national police chief, Anders Thornberg, said he had never seen such violent riots following Sunday’s clashes in Norrkoping, which is about 160km (99 miles) south-west of Stockholm, and nearby Linkoping.

The two cites also witnessed riots on Friday, along with the Stockholm suburb of Rinkeby and the western city of Orebro. On Saturday, there was a riot in the southern city of Malmo.

On Monday, police said 26 police officers and 14 members of the public had been injured in the violence and that more than 20 vehicles had been damaged or destroyed.

They said that around 200 people had been involved in the violence, adding they believed it was organised by networks of criminal gangs. Some of the individuals are already known to police and Sweden’s security service, Sapo.

Sunday’s violence in Norrkoping came after Rasmus Paludan said he planned to hold a rally there. However, he never showed up in the city.

In a statement posted by his far-right, anti-immigrant Stram Kurs (Hard Line) party, Paludan said he cancelled the rally because Swedish authorities had “shown that they are completely incapable of protecting themselves and me”.

He had earlier appeared on Thursday in the central city of Jonkoping, but as he talked into a megaphone while holding a Quran, his words were drowned out by a priest ringing the bells of a local church in protest.

Protests against plans by Stram Kurs to burn the Quran have turned violent in Sweden before. In 2020, protesters set cars on fire and shop fronts were damaged in clashes in Malmö.

Paludan represented Stram Kurs party in the last Danish elections in 2019, where it received 1.8 % of the vote, failing to win a seat.

In 2020, he was jailed in Denmark for a month for a string of offences including racism.

He plans to stand in Swedish elections in September, but he reportedly does not yet have the necessary number of signatures to secure his candidature.

DISCLAIMER: The Views, Comments, Opinions, Contributions and Statements made by Readers and Contributors on this platform do not necessarily represent the views or policy of Multimedia Group Limited.
Tags:
Burning of Quran
Sweden
Sweden Riots