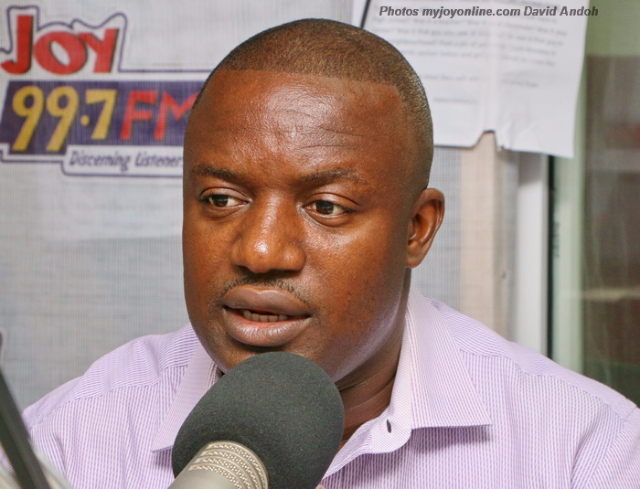 Deputy Power minister John Jinapor has confessed that finding the needed funds to keep power supplies stable has remained a challenge for government.

"Let me be very frank, money has been one of the challenges," the deputy minister told Joy FM's Super Morning Show Wednesday.

John Jinapor was in the studio to dispel fears that a three-year power crisis tamed for the most part of 2016 may be re-surging.

The power distributor, Electricity Company of Ghana has explained that large parts of Accra in darkness is down to maintenance work and not as a result of shortfalls in power generation.

Photo: Some school children forced to study outside during the power crisis

Quelling perceptions that there is a fuel problem, John Jinapor was emphatic that "we don't have a problem with crude purchase".

The Takoradi power enclave received 500,000 barrels of crude last week and another fuel vessel has berthed at Tema.

Ghana is importing some 600,000 barrels of crude oil a month at the cost of about $30million to fire thermal plants.

Explaining why it is now a maintenance problem, John Jinapor said that sub-stations and transformers are experiencing an overload of power.

In recent past, the equipment did not have to supply power as regularly as it now does because there was a shortage of power to distribute.

If all of a sudden there is power available, it exposes certain weaknesses in the distribution chain hence the need for regular maintenance, he explained.

The power crisis had been lingering on because of a 550-megawatt deficit. But government has said that it has added 800 megawatts to the generation capacity of the power sector.

John Jinapor argued that an overload of power is stretching the capacity of the power distribution systems.

Politics and power do not mix- Jinapor

Advising against over-politicising the power problems, the deputy minister said the crisis affected all Ghanaians irrespective of a person's political leanings.

The deputy minister explained that government has had to take hard, painful and unpopular decisions to address the power crisis because it was the right thing to do.

"we just have to be frank open and transparent with the people of Ghana and limit a bit of the politicking," he said.

Government announced consumers must be prepared to pay more for power which has gone up by by 182.75% since 2013.

"But for those difficult and tough decision we took, we probably wouldn't  be where we are today," he said.

He criticised the main opposition NPP which plans to remove the energy sector levy if it wins the 2016 general elections.

"If you take the levy off how then do you restructure the energy sector debts?

Government has said it is using the levies to pay off about GHC 4.4 billion in energy debts owed 12 banks. The debts are also crippling state-owned energy sector companies.

If government pays its debts because ECG will be able to pay off VRA and trigger a pay-off cycle among the power-related companies.