Earthquake in Turkey and Greece: Children, 3 and 14, pulled from rubble three days after tremor 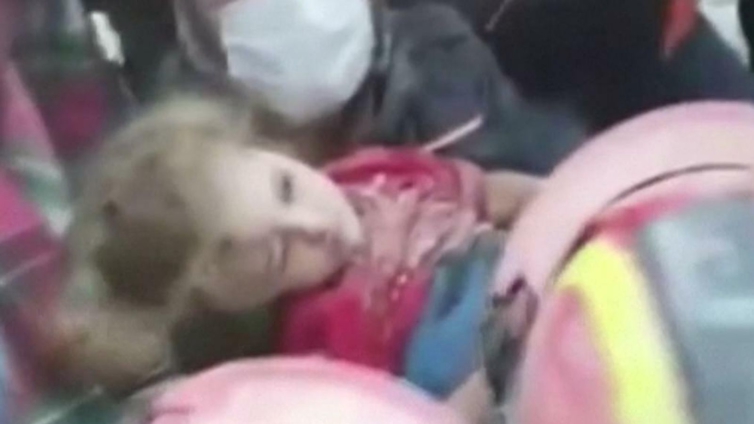 Two children, aged three and 14, have been pulled from rubble three days after a strong earthquake hit Turkey and Greece, killing at least 81 people and injuring more than a thousand.

Rescuers in the Turkish city of Izmir clapped as the young teenager, Idil Sirin, was saved from under a toppled building she had been trapped beneath for about 58 hours.

Shortly afterwards, three-year-old Elif Perincek was rescued some 65 hours after her apartment building also crumbled – reportedly becoming the 106th person to be saved.

Health minister Fahrettin Koca said Elif “strengthened our hope” as she “said hello to life again”, in a tweet with a video of the girl being stretchered into an ambulance as onlookers gathered.

“We are grateful for our teams,” he added.

Elif’s mother and two sisters were rescued two days before she was, according to local media, while Idil’s eight-year-old sister died.

The girls’ survival stories followed similar news on Sunday of 70-year-old man, Ahmet Citim, who was rescued from a collapsed building in Izmir 34 hours after the quake hit. Citim said he “never lost hope” as he lay trapped.

Inci Okan, 16, was stuck under the same eight-storey building before being rescued 17 hours after the quake.

The tremor hit the Aegean Sea on Friday, northeast of the Greek island of Samos. It killed two teenagers found near a collapsed wall and injured at least 19 others on the island.

Its magnitude has been debated, with the US Geological Survey putting it at 7, while the Istanbul’s Kandilli Institute said it was 6.9 and Turkey’s Disaster and Emergency Management Presidency (AFAD) measuring it at 6.6.

The quake triggered heavy surges of water in many low-lying coastal areas, with Izmir and the Greek island of Samos the worst hit. Hundreds of aftershocks were felt.

Turkey has a mix of older buildings and cheap or illegal construction, which can lead to serious damage and deaths from earthquakes.

Adding to its earthquake risk is its position on top of fault lines. In 1999, two powerful quakes killed some 18,000 people in the country’s northwest. This latest disaster has further hurt a nation severely struggling with the pandemic.

Greece is also prone to tremors.