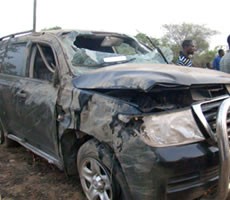 A total of 270 people lost their lives through motor accidents in the Eastern Region in 2011 as against 245 in 2010, showing an increase of 25 deaths.

The fatalities came from 1,795 cases of motor accidents recorded during the period with 2,051 persons sustaining various degrees of injuries.

Speaking to the Ghana News Agency (GNA), in Koforidua, the Eastern Regional Commander, Motor Traffic and Transport Unit (MTTU), Police Superintendent James Sarfo Peprah, said 219 out of the fatalities was as a result of knock-down in towns and villages by speeding drivers.

He expressed worry about the high number of accident cases and deaths in the Region and promised that his outfit would undertake series of training for road users this year to reduce the carnage.

Supt. Peprah attributed the high cases to over speeding, wrongful over-taking and drunkenness on the part of some drivers and said a lot of measures would be put in place to address the situation.

He said the failure of drivers to adhere to traffic regulations also contributed to the rise in accident cases because they disregarded rules and regulations of the MTTU, to the extent that speed limits of 50 km per hour in towns and villages were not adhered to.

Supt. Peprah cautioned that the Police would not spare any driver who goes contrary to the laws this time round.

He cautioned political party supporters to tread cautiously this year as they carry their political activities towards the December general election.