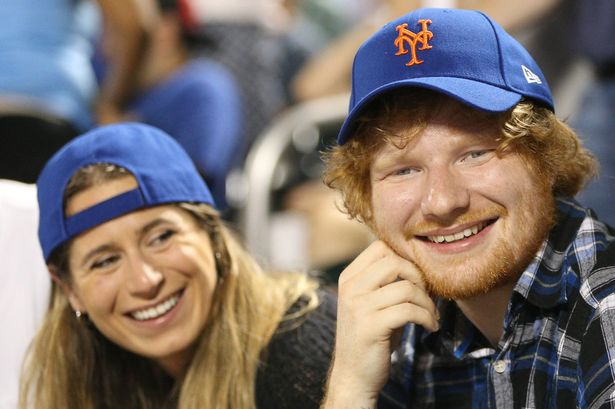 The pop star, 28, and his longtime girlfriend Cherry Seaborn, 26, were married in December, The Sun‘s Dan Wootton reports.

The newlyweds reportedly tied the knot at their home in Suffolk, England in front of 40 friends and family members.

“Ed got married a few days before Christmas. It was very quiet – just Ed’s oldest school pals, limited family and the priest,” the paper reports. “He wanted no fuss and he wanted it to be something entirely for them – just a tiny winter wedding … Neither of them were that fussed about making a big deal about it.”

The Sun reports the pair is planning a larger celebration their wider group of friends in the summer.

A rep for Sheeran could not be reached for comment.

Sheeran first met Seaborn at school when he was 11 — but their relationship didn’t turn romantic until the summer of 2015 when they reconnected and shared their first date at Taylor Swift‘s annual Fourth of July fête.

“I went to Taylor’s 4th of July party. I was texting [Seaborn], and she was like, ‘I’m in Rhode Island at a 4th of July party,’ and I was like, ‘So am I.’ I kinda said to Taylor, ‘Can I invite one of my old schoolmates?’” Sheeran previously told PEOPLE of the fateful party. “The rest is history.”

Finally, in January 2018, Sheeran revealed he’d popped the question to Seaborn — who inspired his ballad “Perfect” — over the holidays.

“Got myself a fiancée just before new year,” the Grammy winner wrote on Instagram. “We are very happy and in love, and our cats are chuffed as well xx.”

Got myself a fiancÃ© just before new year. We are very happy and in love, and our cats are chuffed as well xx

Before their wedding, Sheeran submitted a planning application to build his own chapel on their Suffolk, England, estate, which they share with their cats Dorito and Calippo.

“It is every person’s right to be able to have a place to retreat for contemplation and prayer, for religious observance, celebration of key life and family milestones, marriages, christenings and so forth,” Sheeran wrote in the paperwork, which was ultimately rejected.

So, now that they’ve reportedly tied the knot, when will Sheeran and Seaborn expand their family?

“I actually think the meaning of life is to start a family and pass on knowledge to them and be loved and be loving, so that is definitely on the cards,” Sheeran told PEOPLE in 2017. “But not any time soon.”

DISCLAIMER: The Views, Comments, Opinions, Contributions and Statements made by Readers and Contributors on this platform do not necessarily represent the views or policy of Multimedia Group Limited.
Tags:
Cherry Seaborn
Ed Sheeran