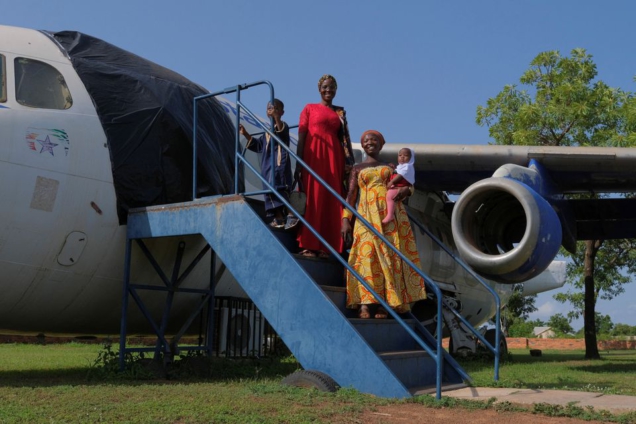 Hundreds of meters above the village of Jenakpeng in northern Ghana, a small drone locked its sights on six airplanes parked in the middle of a verdant field miles away from the nearest runway.

The drone’s 16-year-old pilot, Jenakpeng native Abdul-Latif Zakaria, stood with his father Danaa in the shadow of a vintage Antonov cropduster, one of six planes that world-renowned artist Ibrahim Mahama has transformed into a community learning space.

In 2021, Mahama bought the planes using proceeds from $1 million worth of sales to add to his Red Clay Studio, a multi-acre compound that functions as an open-door, education hub. During the school year, crowds of students like Zakaria attend lectures on the physics of flight, computer science, basic engineering and more – free of charge.

“It’s not so much about inspiring artists, but producing thinkers,” Mahama said of the facility, which he built in his father’s village to give residents the chance to nurture critical thinking – a skill he believes necessary for creative and personal liberation.

“If children grow up to think differently from their predecessors, that’s a step towards a certain kind of imminent change for our society,” he said.

It also doubles as Mahama’s personal workshop where he produces works that go on to sell for thousands, if not millions, of dollars.

The material choices are typical of Mahama, who made a name for himself repurposing unwanted objects like shoeshine boxes and industrial equipment into monolithic works of contemporary art.

For Zakaria, who has visited Red Clay daily since he was a child, the centre invites local children to explore topics otherwise closed to them, helping them build confidence and learn more about who they really are.

To his father Danaa, who has developed a passion for aviation while working as Red Clay’s caretaker, the planes are symbols of a brighter future.

“Before [the planes] arrived, I thought aircrafts were small, like a bird,” he said, smiling. “It is a future generation that we are sowing here… [and] when you sow good seed, InshAllah (if Allah wills it), tomorrow they will germinate.”