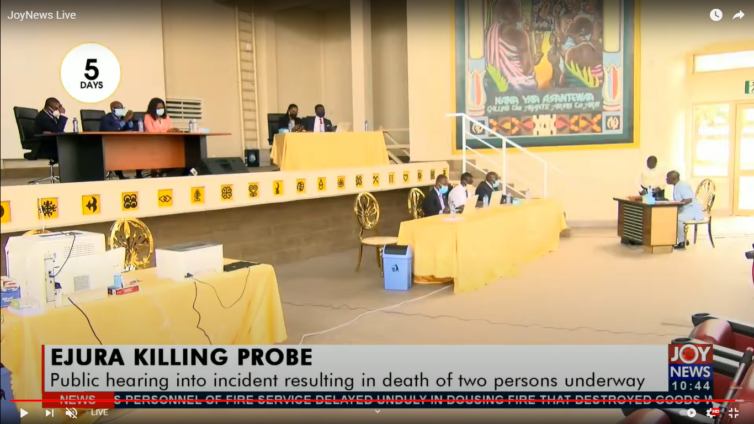 The Three-Member Committee set up by the Government to investigate recent disturbances that led to deaths in Ejura in the Ashanti Region, has recommended  the immediate transfer of the Ejura District Police Commander.

It also recommended the structural expansion of the Ejura Police Station, as well as an increase in personnel to enable the Command deal with such situations better in the future.

The 55-page report  said Deputy Superintendent of Police (DSP) Philip Kojo Hammond should be transferred for incompetence and the fact that  his relationship with the community had been damaged beyond repair.

“The Committee recommends the immediate transfer of the District Police Commander of Ejura, DSP Philip Kojo Hammond, first for his incompetence in handling the situation and for the fact that, his relationship with the community seems to have been damaged beyond repair,” the report stated.

This is one of ten recommendations made by the Committee in its final report presented to the Ministry of the Interior, which was published by the Ministry on Monday.

The Committee also recommended the payment of adequate compensation to the families of the two deceased persons – Abdul Nasir Yusif and Murtala Suraj Mohammed.

Others include the need for Military Establishment to review the actions of the section on the ground led by Lieutenant Martin Opoku Adusei for the inappropriate use of force, and apply appropriate sanctions, training of REGSEC, MUSEC and DISEC officials in the Ashanti Region in Conflict and Crises Management at the Ghana Armed Forces Command and Staff College at least once every year.

The rest are that the National Commission for Civic Education should intensify its public education in relation to the rights, obligations and civic responsibilities of the people of Ejura.

The Committee said  all crowd /riot/crises control units be made to wear bodycams and all vehicles and mobile gadgets employed must also have cameras.

It also called for the establishment of a sports and other recreational facilities in Ejura under the Zongo Development Fund, to re-channel the energies of the youth.

In July 2021, President Nana Addo Dankwa Akufo-Addo, asked the Ministry of Interior to initiate a public inquiry following the killing of two persons and injuries to four others by soldiers during a protest against the death of Ibrahim Muhammed, popularly known as Kaaka Macho, a  social media activist.

“Kaaka” died on Monday, June 28, 2021, after he was allegedly attacked by an unknown assailant while returning home from an event.

According to earlier reports, Mr Muhammed was killed because of his social activism, which some persons felt was making the Government unpopular.

However, police reports suggest otherwise after three people, including his brother were arrested and put before court in connection with the killing.