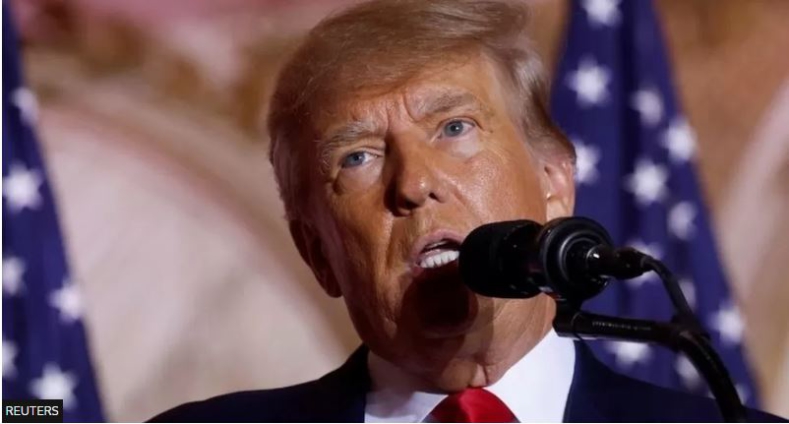 Donald Trump was banned from using Twitter in January 2021

Twitter’s new owner Elon Musk has said Donald Trump’s account has been reinstated after running a poll in which users narrowly backed the move.

“The people have spoken,” tweeted Mr Musk, saying that 51.8% of more than 15 million Twitter users voted for the ban to be lifted.

But the former US president may not return to the platform, earlier saying: “I don’t see any reason for it”.

His account was suspended in 2021 due to the risk of incitement of violence.

Hundreds of rioters entered the complex as the US Congress attempted to certify Joe Biden’s victory in the presidential election. The ensuing violence led to the deaths of four civilians and a police officer.

Earlier this week, the Republican announced that he would once again run for the US presidency in 2024.

He immediately embarked on a series of radical changes within the social media giant, amid concerns that he might loosen Twitter’s regulations on hate speech and misinformation.

With just over a week before the US midterm elections on 8 November, he responded to questions about whether he would reinstate Mr Trump’s account by tweeting: “If I had a dollar for every time someone asked me if Trump is coming back on this platform, Twitter would be minting money!”

Earlier this week, he told employees that the company’s office buildings would be temporarily closed, with immediate effect.

The announcement comes amid reports that large numbers of staff were quitting after Mr Musk called on them to sign up for “long hours at high intensity” or leave.

Will Trump take his megaphone back?

Donald Trump knew this poll was significant – even though his official position is that he doesn’t want to return to Twitter.

He urged his followers on Truth Social to take part in the poll. “Vote now with positivity, but don’t worry, we aren’t going anywhere. Truth Social is special”, he said.

It’s an odd statement. If Mr Trump isn’t thinking of returning, why urge his followers to vote?

Mr Trump would love to have his megaphone back. Twitter was his favourite app, a platform he used to drum up support, and dominate the news cycle.

But while he would have a far greater reach on Twitter, he has a financial interest in making Truth Social succeed. The app is owned by the Trump Media & Technology Group, and if he were to go back to Twitter, it’s hard to see how Truth Social could continue.

That helps to explain why we are not seeing Donald Trump clamouring to come back to Twitter – yet.

But in the longer term, he will have to weigh up financial decisions with political ones, and with intentions to run for president again – don’t rule him out returning.

DISCLAIMER: The Views, Comments, Opinions, Contributions and Statements made by Readers and Contributors on this platform do not necessarily represent the views or policy of Multimedia Group Limited.
Tags:
Donald Trump
Elon Musk
Twitter