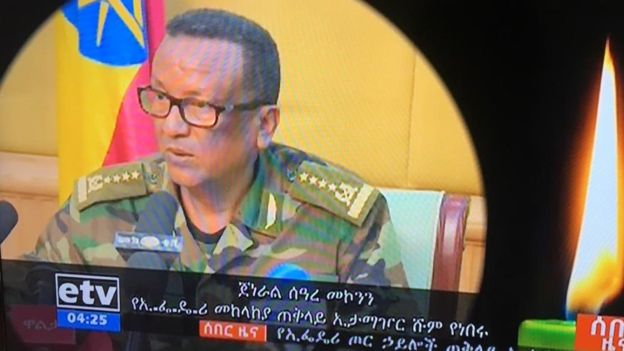 The chief of staff of the Ethiopian army, Gen Seare Mekonnen, has been shot dead by his own bodyguard in the capital, Addis Ababa.

He and another officer died trying to prevent a coup attempt against the administration in Ethiopia’s northern Amhara region, PM Abiy Ahmed said.

In Amhara itself, regional governor Ambachew Mekonnen was killed along with an adviser.

The government says the situation is under control after arrests were made.

The prime minister has gone on TV to urge Ethiopians to unite in the face of “evil” forces set on dividing the country.

The US state department has warned its staff in Addis Ababa to stay inside.

Ethnic violence has hit Amhara and other parts of Ethiopia in recent years.

Africa’s oldest independent country, Ethiopia is also the continent’s second most populous (after Nigeria), with 102.5 million inhabitants from more than 80 different ethnic groups.

A transfer hub for long-haul air travel, it has one of the fastest-growing economies in the world, but a vast number of young Ethiopians are without work.

Gen Seare was killed on Saturday evening at his residence along with another general, Gezai Abera, by the bodyguard who is now in custody, the prime minister’s press office says.

The government says it has reason to think the attack was linked to the assassination of the governor of Amhara a few hours earlier in the region’s capital, Bahir Dar.

Mr Ambachew was killed at a meeting in his office along with his senior adviser, Ezez Wasie, while the region’s attorney general was wounded.

Lake Ayalew has now been appointed as the region’s acting governor.

The prime minister’s office accused Amhara’s regional security chief, Brig-Gen Asaminew Tsige, of plotting the coup attempt. It is unclear whether he has been arrested.

Many of those involved in the coup attempt are under arrest and operations are in progress to detain others, the PM’s press office said.

“The coup attempt in Amhara regional state is against the constitution and is intended to scupper the hard-won peace of the region,” it added.

“This illegal attempt should be condemned by all Ethiopians and the federal government has full capacity to overpower this armed group.” 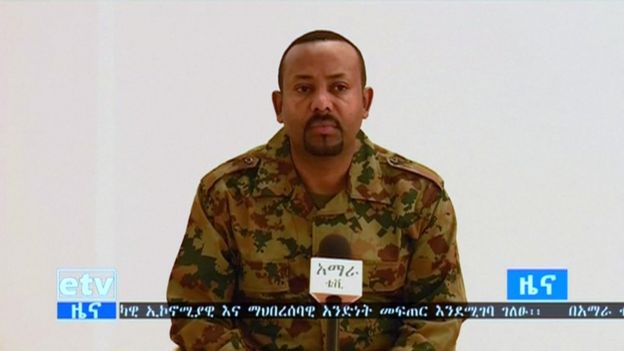 The mayor of Addis Ababa, Takele Uma, has said life will resume as normal on Monday and he called on the city’s public employees to go to work as usual.

Safety and security would be maintained in the capital, he promised.