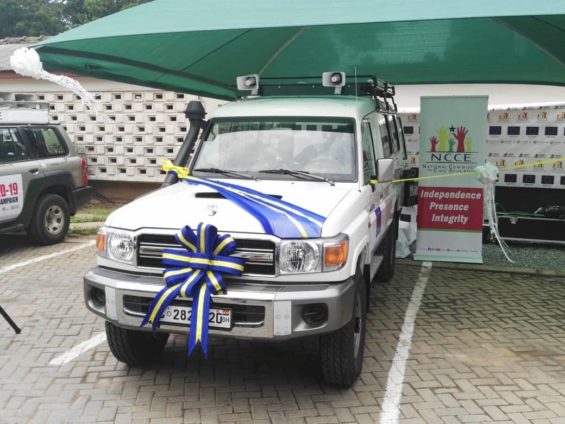 The National Commission for Civic Education (NCCE) has received a major boost as the European Union under the Accountability, Rule of Law and Anti-corruption Programme (ARAP), implemented by the Spanish public foundation FIIAPP, has provided a mobile Cinema Van to extend its educational campaign in Ghana.

In her speech, Ambassador Acconcia highlighted NCCE’s key role in mobilising the society on matters of concern for citizens, on real issues, in raising awareness for political participation, in giving voices to voiceless people.

The Ambassador remarked that the EU is proud of its partnership supporting the Commission and hopes the vehicle will meet the educational needs of population usually left out, particularly in the urban, peri-urban as well as urban dwellers.

Mrs. Josephine Nkrumah , Chairman of NCCE  outlined the fruitful collaboration between the European Union and the NCCE Ghana and thanked the EU support.

The procurement of the Cinema Van for the NCCE is meant to augment the audio-visual capacity of the Commission to reach out to the populace using documentaries, films, and audio-recordings such as jingles, pre-recorded voice messages and live street or community announcements.

The audio-visual Cinema Van is specially designed as a robust vehicle which can traverse the local terrain in Ghana. It is appropriate for operations in all parts of the country.

It is fully stocked with the needed equipment that will make usage possible in all terrains and operational situations.

In implementing and sustaining the gains made in sensitizing identifiable groups on ARAP issues, the Commission will use the Cinema Van to extend its educational campaign, especially on environmental governance issues such as illegal small-scale mining, illegal logging and poor waste disposal in affected communities across the country.

Beyond ARAP, the Van will also deepen the operational capacity of the Commission to reach out to the citizenry, especially, before, during and after the upcoming General Elections with the message of peace and political tolerance.

After the Handover Ceremony, ARAP’s Team Leader, Mrs. Ana Sánchez together with the NCCE Commissioner, the Ambassador of the European Union to Ghana and other guests, inspected the donated Cinema Van.

DISCLAIMER: The Views, Comments, Opinions, Contributions and Statements made by Readers and Contributors on this platform do not necessarily represent the views or policy of Multimedia Group Limited.
Tags:
European Union
NCCE