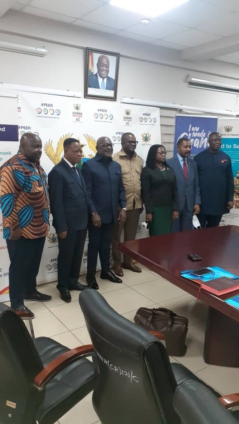 The Ghana Eximbank has been tasked to form a strategic collaboration with the newly established National Development Bank to support the country’s export-led interventions.

Speaking at a short ceremony to inaugurate the board of directors of the company, Minister of State at the Finance Ministry, Charles Adu Boahen charged the board to chart a new path to boost the economy through export trade.

The creation of a development bank according to the Ministry of Finance is influenced by the quest by the government to provide a sustainable funding to complement the efforts of Eximbank in reviving the economy.

The new board of Directors of Eximbank Ghana chaired by Kwadjo Boateng Genfi is expected to form a strategic partnership with the National Development Bank and other partners to increase government support to the private sector in the area of export promotion and industrialisation.

“This opens a new opportunity for Ghana Exim Bank to build strategic partnerships with the National Development Bank for financing and the rolling out of innovative pipeline projects that would drive Ghana’s import substitution initiatives and export promotion programmes for the realization of the President’s vision of a “Ghana Beyond Aid” and the Ghana CARES Program” he noted.

“We have been supporting local industries in the pharmaceutical, agricultural and other sectors of the economy which already exports to the African market. So, we see this as a unique opportunity which we have a critical role to play in”.

Other members of the board include the Chief Executive of the Private Enterprises Federation, Nana Osei Bunso; Second Deputy Governor for the Bank of Ghana, Elsie Addo-Awadzie and Deputy Minister of Trade and Industry, Michael Otchere Baafi.