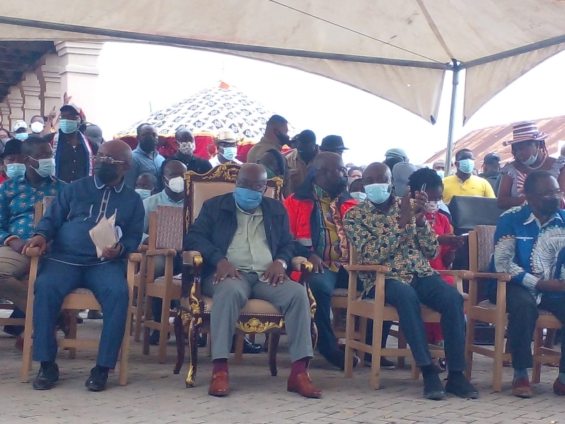 President Akufo-Addo has informed residents of the Volta Region that the abandoned Asikuma-Have road project has been awarded to First Sky Limited at a contract sum of GHC235million to be completed in 24 months.

President Akufo-Addo made this announcement on Friday, September 10, at Anfoega, in the North Dayi Constituency, when he payed a courtesy call on the President of the Volta Regional House of Chiefs, Togbe Tepre Hodo IV, who is also the Paramount Chief of Anfoega Traditional area, as part of his one day tour of the Volta region.

“The Asikuma-Have project has been awarded to an exceptional contractor, First Sky Limited, who has demonstrated commitment and high standards when it comes to road construction. I am confident that the people along the project stretch will very soon see the action”, the President said

According to the President, these projects along the Eastern Corridor will significantly reduce the travel time and cost, especially for Local farmers during the transporting of their food produce to the major towns and cities to trade.

Similarly, the economic impact of this project in providing direct and indirect jobs to over 230,000 inhabitants along the Eastern corridor cannot be overemphasized.

Giving more details on the project, Chairman of First Sky Limited, the project contractor, Eric Seddy Kutortse said the road project involves crush work laying and asphalting of the entire stretch to ensure durability. According to him, the project is expected to be completed in two years.

“We recognize the social-economic significance of this road to His Excellency President Akufo-Addo and the good people of the Volta Region. As part of our high standard operational ethics, we will deploy all cost saving mechanisms to ensure value for money, and also work strictly within the project timeline without compromising on the quality of work.” he added

The 39.3 km Asikuma-Have road project, valued at GHC235 million, is funded by the Government of Ghana, with the Ghana Highway Authority serving as the supervising agency.

The President also used the occasion to emphasis his commitment regarding the expansion and extension of water supply to all parts of the district and the construction of facilities in the Senior High Schools in the district.

“I am hopeful that the good people of North Dayi Constituency will consider all these efforts and crown the New Patriotic Party with a seat in Parliament come 2024,” he added.

Meanwhile, President Akufo-Addo was accompanied by some sector ministers including the Minister for Railways Development and MP for Hohoe Constituency, Hon John-Peter Amewu, Health Minister and the Deputy Minister for Trade and Industry as part of his tour of the region.