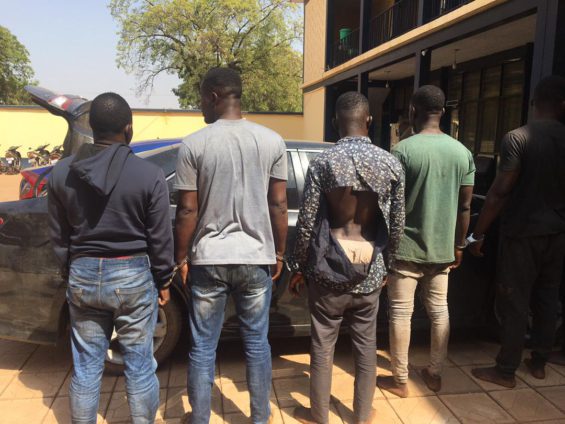 Five suspected car snatchers and armed robbers have been arrested by the Police in the Northern Region.

The gang was arrested on Sunday, January 23, at Sawaba near Buipe in the Savannah Region.

Addressing the media in Tamale, the Northern Regional Police Commander, COP Timothy Yoosa Bonga, said the suspects attacked and robbed a house at Jongsheigu, a suburb of Tamale at about 2:30am.

COP Yoosa Bonga said the suspects were trailed to the Sawaba barrier near Buipe by a combined team of regional counter-terrorism unit and investigators from the Northern Regional Police command where they were arrested.

COP Yoosa Bonga added that one of the suspects, Yussif Mustapha, was fully dressed in a military uniform with the rank of Lance Corporal, adorned with an army headquarters lanyard and armed with a military falcon pistol loaded with 9 rounds of 9MM ammunition.

He said two Toyota Camry vehicles, one black and another with a fake registration number, AS-8445-19 were among the cars in the suspects’ possession.

He added that three sets of military uniforms, two military bags, two sets of Police tactical uniforms, one ballistic helmet for the Police among other military accoutrements were found in the black salon car.

COP Bonga said Mustapha Yussif, the ring leader, named a source he said provides the gang with guns including, G3 and AK47 rifles for the robberies.

He further stated that Mustapha named another person, a teacher at Kanvil R/C, Alhassan Mohammed, aged 29, as his informant providing information about persons to be robbed.

He said the six are in custody whilst investigations are ongoing. COP Yoosa Bonga advised vehicle owners to fix trackers on their vehicles.