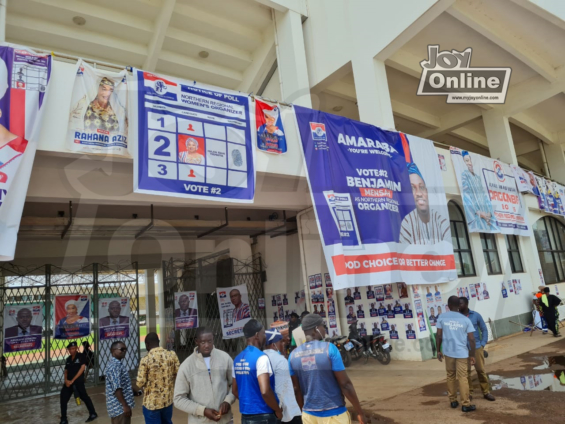 The Northern Regional Police Command has arrested six persons in connection with the ongoing regional executive elections at the Aliu Mahama Sports Stadium.

According to the Regional Crime Officer, Supt. Bernard Baba Ananga, the suspects looked suspicious and appeared to be people plotting to create mayhem at the venue.

All the six persons were spotted in hidden rooms placing phone calls, while the conference was in progress.

“It appears that most of them were here for a different purpose. We were here as early as possible to ensure that the gates were opened to the public. We visited all the rooms and detected that some people were hiding somewhere; about five of them, so we picked them up and sent them to the office for investigations.

“Another one found himself in a secret room somewhere making calls, and one of our officers spotted him. We saw that these persons appear to be characters that look suspicious,” Supt. Ananga told JoyNews.

The six have since been sent to the Police station for interrogation and investigation.

He further clarified that an earlier gunshot that was heard outside the stadium was not from the Police.

31 people are contesting 16 slots in the Northern Regional polls.

Each aspirant is expected to be at the venue with two agents and three supporters.

Four regions, including Northern, North East, Bono East and Western North will have their polls on Friday, with other regions scheduled for Saturday, May 28 and Sunday, May 29.

Already, an injunction has been sought by some aggrieved persons in the Ekumfi Constituency from a Cape Coast High Court to restrain organisers of the Central Region conference from holding the elections.

Director of Elections and Research for the Party, Evans Nimaako, has said measures put in place will help to ensure a seamless and transparent process.