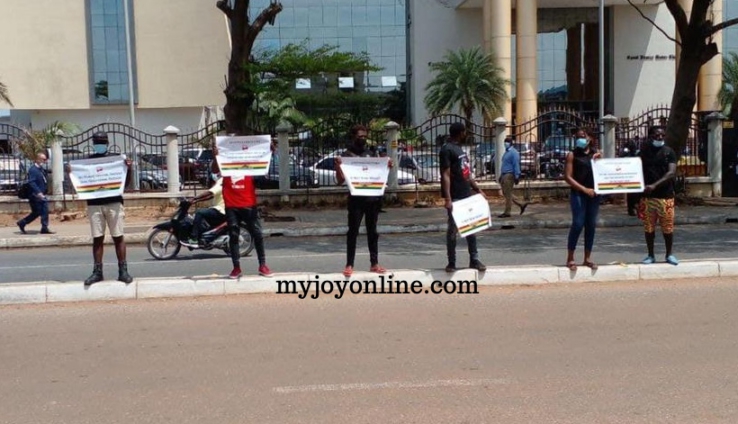 The #FixTheCountry campaigners have hit the street protesting in front of the Law Court Complex in Accra while the High Court is hearing legal arguments about whether to allow them to stage a demonstration.

Some of them were holding placards with the inscription “Fix the country”.

On Friday morning, an Accra High Court ruled that the Attorney General’s office can represent the Ghana Police Service in a case seeking to halt a street protest.

The campaigners had urged the Court to dismiss a case seeking to restrain them from embarking on a street protest.

They argue that only a police officer can request under the public order to restrain protestors from hitting the streets.

In the last few weeks, they have demanded better living conditions through a social media protest, but the decision to take this onto the streets has opposed the police service with public health concerns.

Attorney General Godfred Yeboah Dame showed up in court to argue against the street protest, but the campaigners say this is unlawful.

A member of the legal team for the campaigners Julius Assinyo urged the court to dismiss the case. He told the court it cannot hear a matter bothering on public order filed in the name of the Republic instead of a police officer.

“The applicant does not have the capacity to bring this application under section 1 subsection 6 of the public order act. Act 491. And as such, the Court is not clothed with jurisdiction to hear or grant the application. “