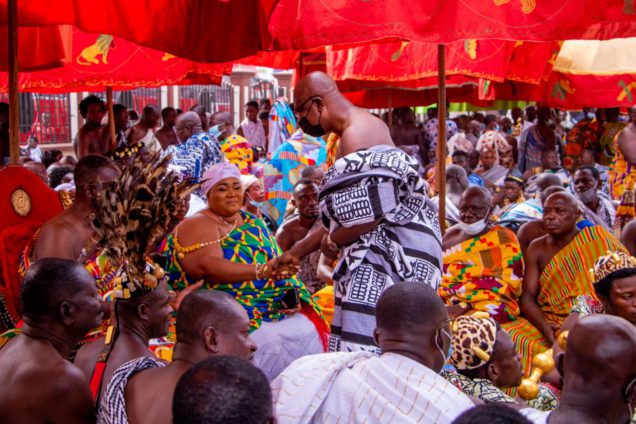 Former Mayor of Kumasi Metropolitan Assembly, Kojo Bonsu, on Sunday joined a host of dignitaries and well-wishers to celebrate the last Akwasidae of the year.

Akwasidae is a festival celebrated by the chiefs and people to mark the beginning of the new month according to the Akan calendar.

As part of the observations of the day, sacrifices were made and sub-chiefs also came from far and wide to pay homage and respect in Kumasi to the occupant of the Golden Stool, the Asantehene Otumfuo Osei Tutu II.

Mr Bonsu took the opportunity to pay his due respects to the Asantehene who is in his third decade as the King of the Asante nation.

While at the Manhyia Palace, Mr Bonsu met with other sub-chiefs to exchange pleasantries.

The former Kumasi Metropolitan Assembly boss’s great feats during his tenure in office earned him many refreshing compliments as he connected back with constituents of the Garden city.

As a son of a queenmother, Mr Bonsu is well initiated in royal protocol and was well acquainted with traditions observed on the day as the splendour of Asante culture was on full display.

According to Mr Bonsu, it was the duty of every member of the Asante nation to ensure that the productive cultural practices of their ancestors were maintained and passed down onto the next generation.

He said on this particular day which happens to coincide with Akwasidae, there will be an alignment of five planets in the night sky which is a rare occurrence and a sign of divine alignment of the traditional culture and its timing with nature.

He was full of praises for Otumfuo Osei Tutu II for his visionary leadership which he said had ensured peace and progress not only for the Asante nation but the greater nation of Ghana as a whole.