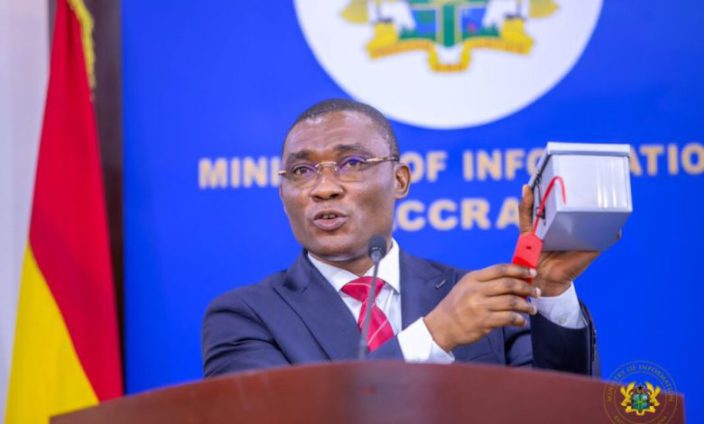 Deputy Lands Minister, George Mireku Duker has been adjudged the best performing Deputy Minister for the year 2021, according to a survey conducted by FAKS Investigative Services.

This was contained in the 10th edition of FAKS annual survey and the details of the information were gathered from October to December 2021.

The survey was conducted to assess the performances of Ministers, Deputy Ministers, Regional Ministers, Parliamentarians and Chief Executive Officers (CEOs) of state-owned enterprises in Ghana.

The results published on January 13, 2022, were generated from the various opinions of the respondents. The survey team was made up of people from academia and media groups based in Ghana.

In all, the MP for Tarkwa-Nsuem Constituency, George Mireku Duker emerged as the best performing Deputy Minister with 3,521 respondents in his favour, constituting an outstanding 89.07%.

The MP has undertaken impressive initiatives within six (6) months, since he was sworn in on June 25, 2021 as the government appointee responsible for mining activities in the country.

He reports to the substantive Minister, Samuel Abu Jinapor, who doubles as the MP for Damongo in the Savannah Region. Under the able leadership and unflinching support from Mr. Jinapor, the Deputy Minister has been constantly working to ensure safe, environmentally-friendly and profitable mining operations to boost the socio-economic development of Ghana.

George has played outstanding roles in both the large-scale and small-scale mining sectors in 2021, although there is still room for improvement.

His performance evaluation was mostly based on his hard work and efforts in fighting against the alarming rate of water pollution and land degradation through illegal mining activities, popularly known as ‘galamsey’.

Also, he has coordinated the ministry’s collaboration with the security forces across the country to protect large-scale mining concessions from encroachments. Leaders in both mining sectors in Ghana adore him because of the cordial working relationships he has developed with them to create a conducive environment between the ministry and the mining industry. He is humble, respectful and always ready to listen to divergent opinions.

As part of his efforts to pursue President Akufo Addo’s vision of addressing the illegal mining menace, he has held consultative dialogues on responsible small-scale mining at some of the regions where mining operations are conducted, including Ashanti, Western and Northern.

Mr Duker believes that small-scale mining is a burgeoning economic activity that has a remarkable potential for creating millions of lucrative jobs for the youth, if the sector is properly regulated to substantially minimize its negative impacts.

He has spearheaded the introduction of the National Alternative Employment Livelihood Project (NAELP) for illegal miners, launched by H.E. Nana Akufo Addo in October 2021. The purpose was to create alternative jobs for “galamseyers” to discourage them from operating illegally to cause further widespread environmental damages.

The Minister has led the compilation of Small-Scale and Community Mining Operational Manual, which shows the procedures to be followed before the commencement of legitimate small-scale mining operations. In an effort to minimize or end mercury and other poisonous chemical use, his office has donated some “mercury-free” gold processing equipment worth US$ 125,000 each to the various Community Mining projects. The equipment has an estimated 90% gold recovery rate, which is expected to motivate the miners to stop using the mercury processing approach that recovers just approximately 30% gold from their operations. After ascertaining the efficiency and realizing the impressive results of the equipment, his office has ordered extra one hundred (100) of the gold processing equipment to be distributed to the small-scale miners across the country.

The Deputy Minister has successfully launched Community Mining Schemes in seven (7) District and Municipal Assemblies since he assumed office and the locations are Mmaanpehia in Ahanta-West Municipal, Akoon in Tarkwa-Nsuaem Municipal, Kwabre in Jomoro Municipal, Abaam in Kwaebibrim District, Jacobu in Amansie Central District, Adukrom in Ahafo-Ano South District, and Mfante in Ahafo-Ano North District.

These have together created about 35,000 direct and indirect jobs for the youth. Duker will continue to commission more viable Community Mining schemes across the country to encourage responsible and sustainable small-scale mining activities in Ghana.

Mr. Duker’s team has proposed a Minerals Development Unit under the state-owned Agricultural Development Bank that will provide credit facilities to registered small-scale miners in Ghana to assist in financing their operations.

To encourage responsible mining, due diligence will first be conducted on mining sites of registered small-scale mining companies to ensure that each credit applicant follows the standard operating procedures to promote sustainable mining. Only eligible applicants after the proposed site evaluations will have access to the financing opportunity.

He is hopeful that this approach will motivate the miners in the sector to operate within the regulations. In order to minimize delays in the mining licence acquisition processes, the office of the Deputy Minister has introduced online application to augment the process and hence, attract illegal miners to apply for their licenses, instead of travelling to Accra for that purpose.

Also, to fight illegal mining on the water bodies, five (5) speed boats have been procured to be used by a mining taskforce for monitoring.

The hardworking appointee has introduced an annual meeting for all Minerals Commission Regional Managers and District Officers to evaluate their performances on intensifying strict monitoring of small-scale mining activities across the country.

The first meeting was held in Kumasi in September 2021 to urge all responsible officers to sternly exercise their mandates to justify their existence as government representatives who are charged to ensure minimization of water pollution and land degradation in the various mining areas under their jurisdictions.

His effective leadership and strong negotiation skills have led to restoring calm during workforce agitation in Ghana Bauxite Company at Awaso in the Western Region. He has proposed the establishment of a large-scale mining audit committee to ensure that the large mining companies operate with respect to the mining laws in Ghana.

Other initiatives by the Deputy Minister include the introduction of the Minerals Concession Audit Committee in October 2021 to scrutinize small-scale mining concessions to ensure legitimacy, the inauguration of a taskforce in October 2021 to curb mineral smuggling through the country’s borders, the introduction of the government’s sponsored small-scale mining awards programme to commend disciplined miners who operate under the laid down procedures, thereby motivating others to follow suit.

Another important initiative is the establishment of a gold refinery in Accra, which is expected to refine at least 30% of gold exploited from Ghana. Besides gold and diamond mining, his office is working out modalities to regularize the small-scale operations of salt and other industrial minerals exploited from the country.

He believes that formalized industrial mineral activities can immensely contribute to the socio-economic transformation of Ghana, as they are essential to thousands of everyday products like medicines, paints, ceramics, construction materials, inks, paper coatings, etc.

Small-scale mining operations are associated with significant challenges which the Deputy Minister is working assiduously to hammer out action plans to address them in the interest of the ministry, the government and the good people of Ghana.

Considering these aforementioned achievements within 6 months, it is justifiable that the hardworking and visionary Deputy Minister Responsible for Mining, George Mireku Duker deserved to be declared the best performing Deputy Minister in 2021. Ghanaians are expecting more from him in terms of sanitizing the small-scale mining sector to guarantee safe operations in minimizing land degradation and water pollution.