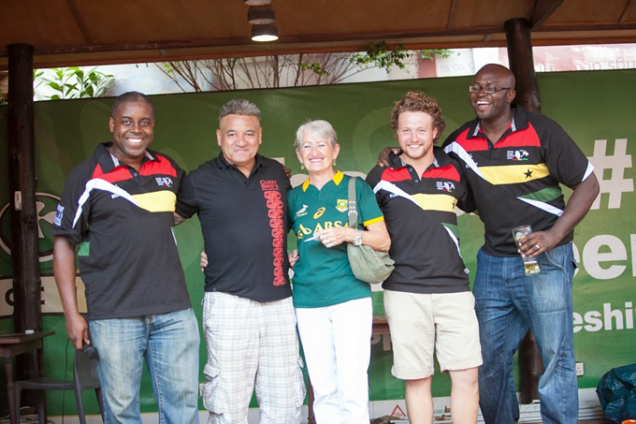 Ghana Rugby is to hold a second raffle event at Cuzzy Bro’s on 4 October 2014 following a success of the first event on Saturday 27th September 2014.

The first event was arranged after an agreement between Ghana Rugby and Cuzzy Bro’s, a popular restaurant and bar in Osu, to work together to raise funds for Ghana Rugby and to create networking opportunities.

According to Mr. Ernest Hanson, Vice President of the Ghana Rugby Football Union (GRFU), the success of the venture will become more apparent in future.

“The first event held when Australia and South Africa clashed in a Rugby Championship Match in South Africa on 27 September was the first step in a series of initiatives by the Board to create awareness of Ghana Rugby and in the process to hopefully interest corporate Ghana to support the development of Rugby in Ghana,” Mr. Hanson said.

Mr. Sidney Yankson, Director of fundraising of the GRFU Board, explained the event included the selling of raffle tickets and replica shirts as well as contributions from Cuzzy Bro’s based on the sales of the day.

He added, “The amount raised on the day may not have been significant but it was indeed a significant event. It did not only give an important signal to the Rugby Family in Ghana that all avenues need to be explored given the enormous needs to fund structures and programmes, but also laid a good foundation to build on.”

“The new Board inherited about 224 Ghana cedis when it took over on the 5th of June and although a total budget is in the process of being finalised, the first programme namely the Ghana Rugby Club Championship will require approximately 75,000 US dollars to plan and conduct,” Mr. Yankson said.

The Ghana Rugby Club Championship is planned for the month of November 2014 and January to February 2015 and will include 60 matches to be played in total between two Pools of 6 teams each from Greater Accra and CentWest. The two top teams in each Pool will proceed to semi-finals, followed by a final in Accra on 21st February 2015.

Mr. Yankson also explained that many other programmes need to be funded including a Main Sponsor that will entail the sponsorship of the Ghana National senior and junior teams, the Ghana Eagles and Eaglets respectively, including the development, management and various international tournaments and matches. The Ghana 7s Tournament will span over three days and will include men, women and school teams competing for the respective cups, Grassroots Development at schools level that will determine the future of Ghana Rugby, and Women Rugby.

“Although the All Blacks have already won the Rugby Championship this year, any clash between the All Blacks and the South African Springboks is always an exciting event and will be watched by millions of people globally,“ Mr. Heta Mann, owner of Cuzzy Bro’s said.

According to Mr. Mann there will be plenty entertainment on offer during Saturday’s event and invited all to take part in the festivities.