The Electoral Commission has lamented, Ghanaian voters’ biometric data is firmly controlled by foreigners, casting a slur on the Commission’s independence.

The EC Chairperson, Jean Mensa was emphatic, Israeli firm Superlock Technology Limited (STL) contracted for the maintenance of the Commission’s software and Data Center equipment, has “unlimited access” and can control “everything”, “remotely”.

The biometric data, she said is housed in a “filthy” office space run over by wires and which cost the taxpayer $4m paid to foreign vendor company anytime there is a need to do some maintenance.

The chairperson, nine months old on the job, was pouring out the challenges the Commission faces in preparing for the 2020 elections. She paid a courtesy call on The Multimedia Group Limited at Kokomemle on Tuesday.

Photo: Jean Mensa was sworn in in August 2018 after rare wholesale changes at the Commission

To begin with, the Commission is worried that its IT staff do not have administrative rights to passwords to access the biometric database gathered through Biometric Voter Registration (BVR) equipment.

Mrs. Jean Mensa said she was told by STL, they found the Ghanaian staff “untrainable”.

Citing an example of the extent of steep reliance on STL company, she said a recent plan to clean 13,000 biometric verification devices ahead of the referenda for the creation of new regions.

By clean up, she explained, the devices had to be wiped and re-tested for effectiveness. But this will cost $1.7m to be paid STL.

Jean Mensa said the EC was prepared to dole out $200,000 to the IT department to run this clean-up exercise. But none of them had been trained to execute the technical job, she indicated.

According to her, the feedback from her IT department was: “we don’t know how to do it.” 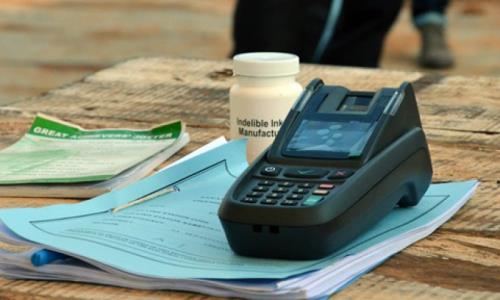 It is these biometric devices purchased in 2011 which are set to be re-used in the voter registration exercise. But these devices, according to the EC, are now outdated technology, bulky, unwieldy and expensive.

The casings holding the devices “is a whole suitcase as though you are going to an engagement to marry a woman,” Jean Mensa said and revealed each case costs $2,500.

Imagine the cost involved in ordering several more for a registration exercise, she suggested.

While it will cost $56m to refurbish the devices and purchase new ones for the mass registration exercise, buying a whole new set of emerging biometric devices will cost $20m less, the EC chairperson said.

This is why, the Chairperson explained, is unable to set up registration centers widely across districts for the 2019 voter registration exercise.

It would be expensive to do an expansive registration exercise with the current biometric devices hence the decision to restrict the exercises to the district offices only.

“Why do you go on with such a system that is not user-friendly, that is costly” Jean Mensa quizzed.

The EC chairperson indicated, the Commission would rather save that money to buy the modern devices adapted with multiple capabilities beyond voter verification.

They can transmit pink sheets by scanning and can also be used for registration. “Some of them are like tablets,” she picked out an advantage of new technology.

“The EC is doing everything possible to ensure people’s right to register is suppressed, that is a way of rigging elections,” he fumed on Top Story on Joy FM.