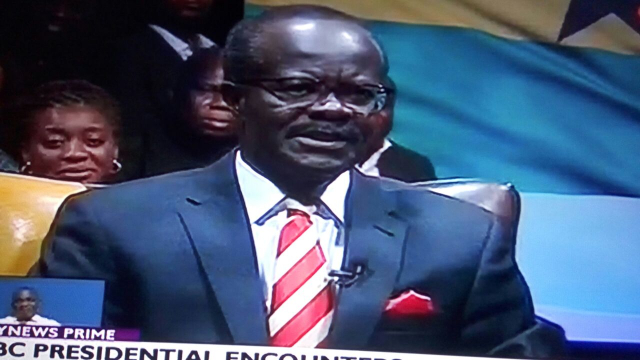 The Progressive People's Party (PPP) Presidential Candidate has said the economic challenges bedeviling the country are the fruits of bad leadership by the NDC government.

Dr Papa Kwesi Nduom said Ghanaians made a grave mistake when they voted for the governing National Democratic Congress (NDC) in the last election.

"We are as a people are made poor by bad governance and leadership. Ghanaians have wasted their votes on leadership that has not utilized all our hopes and aspirations," he said.

The celebrated businessman said Ghanaians deserve a better life than what they have been provided by the NDC.

The PPP's leader made these comments when he took his turn at the Ghana Broadcasting Corporation (GBC)'s Presidential Encounter Friday.

NDC flagbearer, President John Mahama was the first presidential candidate to appear on the platform to tell Ghanaians the policies he intends to implement if he is given a second term in the December polls.

He also delved into his government's achievements in the three and a half years he has been in office.

Dr Nduom who has holds the opinion that the President has entangled Ghanaians in hardship because of what he has described as unsound economic policies said the general elections present an opportunity for the NDC government to be voted out.

"Thankfully, the people have the chance to vote for competence based on practical experience, by voting the PPP and Papa Kwesi Nduom," he said.

He said the PPP has a policy focus that is different from the other political parties. "Job creation based on competent, incorruptible leadership and no political party has been so direct as we state in our policy documents."

The PPP, Dr Nduom said would implement non-negotiable policies such as reforming the Constitution to make sure Ghanaians vote for the various District/Municipal Chief Executives as practiced in South Africa and Cote d'Ivoire.

"We will separate the office of the Ministry of Justice from the Attorney-General so that we can fight the encumbrance of corruption," he said.

The party would also set up a Cashew Development Authority to help cashew farmers reap the fruit of their labour. The Authority will also oversee all activities related to cashew development in the country.

"We will redesign villages and towns with good schools, roads, libraries so that Ghanaians can see for a change not like what is happening in Akwatia, and Obuasi," he said.