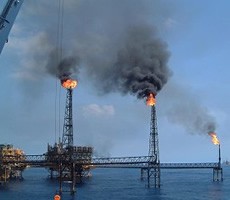 Officials of the Ghana National Petroleum Corporation (GNPC) have been deployed to Nkwanta North in the Volta Region to confirm if a liquid substance said to be oozing from a well is truly crude oil.

Residents of the area are already jubilating over claims of oil find, Friday afternoon.

A man said to be digging a well for water was shocked when an oily substance suspected to be crude oil started gushing out.

The Member of Parliament of the area John Oti Bless is also convinced the substance is crude oil.

He told Joy News’ Evans Mensah the find is God’s answer to their prayer for water.

According to him, residents of the area have been suffering under extreme water shortage for years with most of them resorting to dug-out wells.

It was the search for water that has brought this blessing of oil find, Oti Bless said.

“The people have suffered too much. It is a positive signal from God. A lot of jobs will be created,” he added.

He said the area has been fenced after a huge crowd surged to have a glimpse.

Joy News can confirm that officials of the GNPC have been despatched to the area to ascertain the veracity of the claim.

National Security officials have also moved to the place.