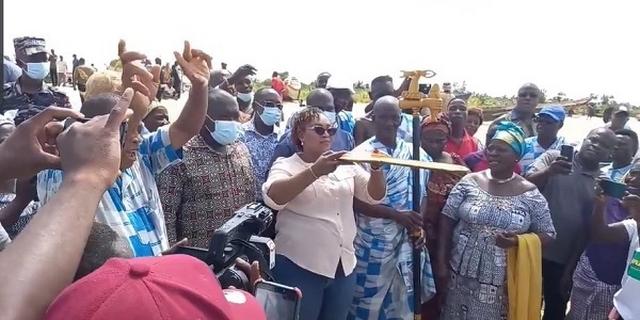 The Minority in Parliament is accusing government of poorly managing the closed fishing season which started on Thursday. They say the mismanagement will make it difficult for the objective of boosting fish productivity in the country’s waters during the season to be achieved.

Ranking member on Parliament’s Food and Agriculture Committee Eric Opoku told a news conference in Parliament House the NDC is not against the idea of closed season to help reverse the dwindling fishery resources of the country. But he says they are passionately opposed to some policies being implemented by the Nana Akufo-Addo/Bawumia government which “in our view can hinder the effectiveness of the implementation of the closed season.”

He criticized government’s decision in 2020 to increase licence fees for vessel owners from $35 to $135 per gross registered tonnage. “The increase is almost 300 per cent.

“Vessel owners must not pay for licence over the two months of the closed season for effective implementation and the realisation of the full benefits. You cannot close the season and simultaneously expect individuals with legitimate fishing licence not to flout the directive. In other words, you are merely cheating the fishers. How can you punish those vessels who may flout the closed season orders on the strength of their licence?

Mr Opoku questions why government is not compensating fisherfolks during the closed season.

“In most jurisdictions, when government imposes a fisheries management measure such as closure for two months, industry players are cushioned with some social intervention measures to enhance compliance and fishers are compensated to make life comfortable for them and their families.

“On the contrary, the Nana Addo/Bawumia government continues to take more from them, making life unbearable,” he observed.

The Minority Spokesperson on Agriculture is also alleging that government is violating section 100 of the Fisheries Act 2002 (ACT 625), by charging vessel owners money to pay observers whose duty it is to ensure fishing regulations are abided by. He describes it as extortion.

“In consonance with the law, the observers are supposed to be public servants appointed by the Minister upon the recommendation of the council. Why is the industry (private entities) paying public servants whose main duty is to check/oversee the activities of the vessel owners? What is even more worrying is that no social security and other statutory payments are made on their behalf, thus risking their future. This is an illegality that must be stopped forthwith!” he said.

“We are reliably informed of an illegal bank account called the GITA/MOFAD account in which these monies are being lodged on the blind side of the Controller and Accountant General and the Auditor General. We demand the immediate closure of this bank account and stoppage of these extortions and ensure strict compliance with the provision of the law,” he said.

Mr Opoku also expressed concerns about a letter issued by the Fisheries Commission on June 22 directing all industrial vessels to re-apply for a license.

“This is not based on law because the processes leading to the operationalisation of industrial vessel are well laid in the law. The authority to allow industrial vessels to operate in Ghana is vested in the Ghana Maritime Authority and not the Fisheries Commission. The commission only has the power to grants licences to fish, which is renewable quarterly. It is therefore confusing what exactly the commission seeks to achieve with this letter.

“In fact, the Fisheries Commission is overstepping its mandate and must be called to order. Particularly, when it failed to put in proper management measures that got Ghana to be issued a second yellow card which if not reversed will soon disable Ghana from exporting seafood to the European Union. Fine people, this is plainly an endeavor to grease up the wheels of nepotism, cronyism and corrupt practices in the Fishery sector and we will not condone it!

“In conclusion, the Ministry must look again at the implementation of the closed season and ensure fairness and equity to all players,” he concluded.