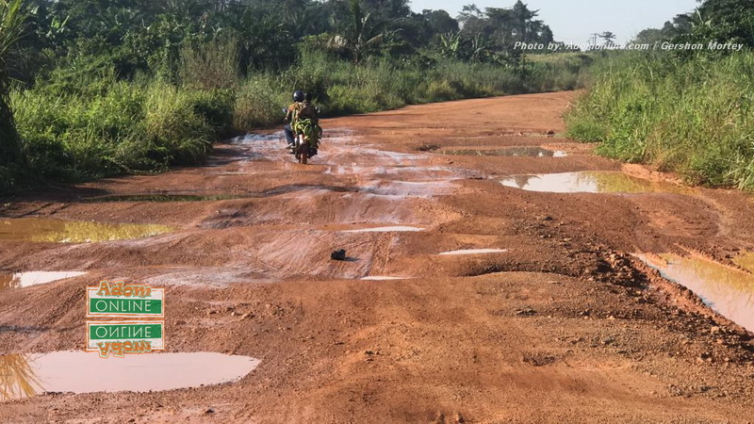 A file photo of a deplorable road in Ghana

Government has released ¢1.6 million to complete asphalting works on the Gomoa Afransi/Gomoa Dawurampong road to enhance transportation of goods and services.

Member of Parliament for Gomoa West, Alexander Kwadwo Kom Abban made this known to the media at Dawurampong.

The MP who is also the Deputy Minister of Communication said, the government under President Akufo-Addo’s  ‘2020 is the year of roads’ was not a rhetoric but a reality.

He assured all that the Afransi, Dawurampong, Apam-Junction to Apam town which is a major road serving about 30 communities would be tarred to transform the road network in Gomoa West.

Mr Abban said the contractor would proceed to the site to commence work within three weeks and that the first phase would cover Gomoa Afransi to Gomoa Dawurampong Senior High School (SHS).

According to the Deputy Minister, the second phase of the contract had been awarded to the same contractor to continue construction and tarring of the road from Dawurampong SHS to Apam town.

He said the construction and tarring of road linking Afransi to Dawurampong, Apam was started during former President John .A. Kufour but was abandoned after his tenure.

Touching on the upcoming general elections, Mr Abban called on Ghanaians to give four more years to President Akufo-Addo for him to continue the quality governance of the country.

He asked the people to vote for selfless, competent, visionary leaders who can manage the country’s economy prudently to create jobs, quality education, unique healthcare, roads and others to promote socio-economic wellbeing of Ghanaians.

The MP said the three and half years administration of President Akufo-Addo has been seen by Ghanaians and the rest of the World, adding that, the prudent economic management had transformed the country.

The Deputy Minister therefore asked the people of Gomoa West to vote massively for him and President Akufo-Addo in the upcoming Presidential and Parliamentary Elections to help sustain the social interventions rolled out to support the people.