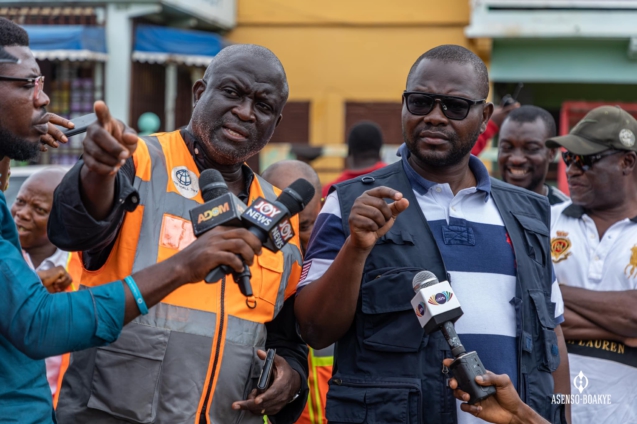 Minister for Works and Housing, Francis Asenso-Boakye says government will take drastic measures to address the perennial flooding experienced in some parts of the country.

The Minister said this during a tour of some flooded areas in Accra and Tema as a result of the heavy downpour over the weekend.

Referencing a flooding situation in Accra back in the 1960s, Francis Asenso-Boakye admitted that government is aware of the flooding problem in the country and will address it.

“In 1960, we also experienced some sort of flooding at that time, that means that it has been with us for some time and it means that we know the problem and so we must take certain actions,” he said.

Mr. Asenso Boakye is not happy that despite the government’s massive investment in tackling flood, the situation persists.

He said the indiscipline of building at unauthorized places, including on water ways, must stop.

“Whenever you are supposed to build, you have to go and request a building permit from the District Assembly but most people don’t do that. They just build anywhere they like but it is the responsibility of the District Assembly to make sure that they issue permits and whenever permits are not issued, they should be decisive and pull down any structure that has no permit issued,” he noted.

Following hours of rain on Saturday, parts of Accra and other urban centres in the Greater Accra Region, including North Kaneshie, Kwame Nkrumah Circle and Kasoa in the Central Region, were flooded.

Francis Asenso-Boakye was accompanied on the tour on Sunday, May 22, by officials from the Ministry, the Hydrological Services Department, and the National Disaster Management Organisation (NADMO).

The purpose of the visit by the Minister was to ascertain the cause and impact of the flooding and to commiserate with the affected persons.