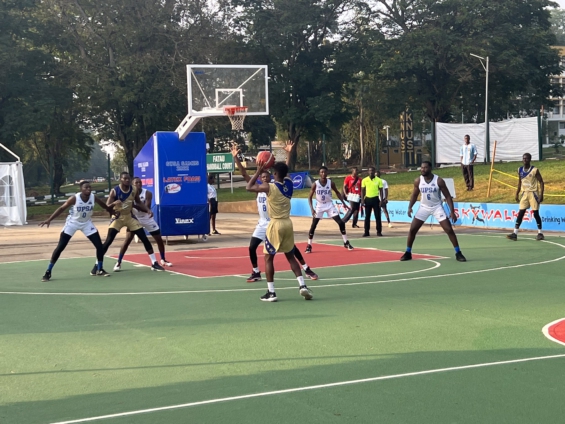 Awoken by an humiliating defeat to Marshall University in the 2014/15 Universities, Polytechnics and Colleges (UPAC) basketball games, Meme Falconer was brought in, as the university’s sports directorate sought attempts to restructure the team.

Two years down the line, Meme departed the Guerrillas after winning one UPAC title, one Ghana Universities Sports Association (GUSA) title and for the first time, a Federation of Africa University Sports (FASU) basketball championship for the university. But he did not leave the team with these silverware alone, as he departed with a gem in Dr. Samori Camara, a man who oversaw three additional UPAC titles, one more GUSA championship and another FASU gold medal.

After three years in charge of the Guerrillas, Samori handed over to Emmanuel Wobil, popularly known as Gana. With his arrival some months before 2020’s GUSA games, the Guerrillas 3-peated the GUSA basketball championship and had the momentum to add to their four UPAC titles in a window of four years, while also staging a defense as two-time FASU champions. But that was not meant to be, as covid-19 ravaged the world economy and sports communities.

But in all of this dominance, the three coaches; Meme, Samori and Gana, had an array of talent available to them with Joel Tham, Maxwell Okoampa and Emmanuel Wolff anchors on which Meme won national and continental acclaim. To Samori, Emmanuel Achempong (2Kays), Gracefield and Rafiq were pillars behind his team while Gana had at his disposal, Aminu Abibu, Treasure, Kay and Junior.

However, for Gana and his team which was unfortunate to taste UPAC, or even stage a defense of the Guerrilla’s FASU title, their hibernation cause by covid-19 meant keys which had sustained the Guerrilla dominance, will all pass out after completion of their respective degrees at the University of Ghana.

Shortly after, the FASU games came back on with the 2022 edition, and the University of Ghana went on to represent – but with a wholly new team which had never experienced basketball at that level. As a result, a six-year unbeaten streak which had began right under the tutelage of Meme, on to Samori and then Gana, was lost in only the Guerrilla’s first game as two-time FASU defending champions.

Hosts, Kenyatta University defeated their counterparts from West Africa, 79-74, in a successful slaying of a team which had grown to become a continental basketball mammoth.

“I just don’t want to remember it, because it was really painful,” Emmanuel Atta Badu, now captain of the side told Joy Sport’s Mishael Quaynor. “We had a good team and we just blew it all. Four, five years of hard work, we just blew it. It was very painful.”

While the years of supremacy was effected by coaches on the sidelines and players who felt the pinch and crunch of every tackle on the floor, the sports directorate of the university of Ghana was tasked with the policy work of creating such a force. And despite witnessing live, all the years of hard work crumble, Dr. Bella Bello Bitugu, head of the directorate has made peace with their turn of fortune, and is now resolved to oversee the creation of another ‘guerrilla’ side.

“But you have to understand every team, every nation had troubles with practising and exercising, but do not forget the Eastern and Southern Africans were already practising sports for months before we even got there. But that is not an excuse. What I’m trying to say is, we experienced the normal trend of sports – today you are on top, tomorrow you are down. You come back, get back to the drawing board, put things together and move on,” he concluded.

But for that chance to re-exalt themselves on Africa’s tertiary basketball community, the Guerrillas will need to go through the ‘local’ mill of the GUSA championship, with lips-licking rivals drooling at the sight of what they view as a ‘vulnerable’ team.

Just as the Guerrillas had no prior FASU experience before losing that title, they are also without GUSA experience, and aware the big names of University of Cape Coast and Kwame Nkrumah University of Science and Technology will want to capitalise.

“[We have to] just be relentless. It is not basketball we haven’t played before. It is just about being on the courts and giving out your all, holding the ball and putting it in the net – being yourself,” Atta Badu revealed when asked what the message to the inexperienced Guerrillas was.

Meanwhile, Gana, who is making a return to the side as head coach for another GUSA campaign, understands the baby-teethed nature of his new team but is confident they can be moulded into the legends they seek to become.

“If you look at our training from day one till now, you can see improvements and see that the team can still excel in GUSA. This team has a little bit of lapses, but they’ll get to the finals and when we get there, we’ll cross the bridge.”

While all current names of the Guerrilla are new ones, captain, Atta Badu, is a character who has been closely associated with the team – from the years of Dr. Samori to that of Gana. As a result, he understands the fabric beneath the Guerrilla culture – one which made the team so dominant and appreciates his role in ensuring the new members of the team pick up quickly.

“It’s hard because they don’t know what you are trying to instill into them, and they are also grown-ups so you have to show them what being a Guerrilla means, what it entails and everything that comes with it. They think you are forcing them but when you get the results, they know ‘yeah, this is what it means to be a Guerrilla. It doesn’t just come to you because you put on the jersey.”

While it seems the new blood drafted into the team could still be struggling to grasp the lining beneath the yellow and blue threads, there is a certain level of value they have accorded to the chance of being called a UG Guerrilla. As a result, starting from the 2022 GUSA games, they are eager to begin a streak of their own, after losing that set by forerunners.

“We’ve sat behind and watched our predecessors do a very good job. So being part of the team alone is a goat feeling [but] a primary thing you need to understand is, here, winning is something you are solely made of – you just come to win. So if you’re not here to win, you can’t be on this team,” Power Forward, Michael Atopley said.

The Guerrillas were drawn against University of Professional Studies Accra, The Akenten Appiah-Menka University of Skills Training and Entrepreneurial Development (AAMUSTED) and Ghana Institute of Management and Public Administration (GIMPA) for the group stage of the 2022 basketball championship.

DISCLAIMER: The Views, Comments, Opinions, Contributions and Statements made by Readers and Contributors on this platform do not necessarily represent the views or policy of Multimedia Group Limited.
Tags:
GUSA 2022
Mishael Quayor
UG Guerrillas