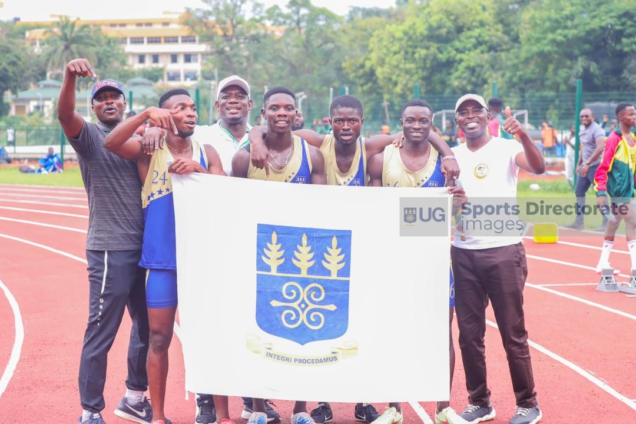 The University of Ghana Athletics Team (track and field) topped the athletics medal table at the 27th Ghana Universities Sports Association (GUSA) Games being held at the Kwame Nkrumah University of Science and Technology, (KNUST) Kumasi.

The Director of Sports, UG, Dr. Bella Bello Bitugu, stated, “This is the manifestation of the silent and patient investment. It means we are doing something right to beat even those universities that specialise in physical education and sports. This is the result of what we are doing. I personally feel fulfilled and thank you, Team UG, from Senior Management to the student athletes.“

Cadman Evans Dufu Yamoah, a level 400 student who benefited from the University of Ghana’s Policy on the Admission of Athlete Students (UG-PAAS), broke the GUSA record of 2.05 meters to set a new record of 2.11 meters to win gold in the high jump.

Interestingly, he set the old record when UG hosted the 26th edition in 2020. Cadman was elated to bow out of the GUSA Games on a high at an individual level and engrave UG in gold again in the ultimate tertiary sports competition.

“I am delighted to win my second GUSA gold medal in High Jump and set the record for two consecutive times. Ebenezer Gyimah of the University of Cape Coast gave me a stern competition; however, I was determined to write my name and that of UG in gold correctly, so it happened,” he told the University Sports Directorate.

Head of athletics coaches at the Sports Directorate and in charge of field events, Mr. Emmanuel Bruce-Okine Jr, recounted how far the team has come, and remarked it was not a walk in the park but hard work, months and years of training ensured the university achieved this feat. However, he stated that more training time than the usual will be given to the female athletes, especially to condition them to the standards of winning laurels at the extramural level.

Mr. Augustine Amissare, Senior Assistant Registrar at the Sports Directorate, credited the feat to the well-structured programmes and policies put in place by the Sports Directorate with support from Senior Management of the University. He went on to say that the team’s performance will be carefully analyzed and evaluated in order to strengthen the team’s shortfalls and consolidate the team’s positives.

The Games are still on going with ball and racket games yet to end.

DISCLAIMER: The Views, Comments, Opinions, Contributions and Statements made by Readers and Contributors on this platform do not necessarily represent the views or policy of Multimedia Group Limited.
Tags:
GUSA 2022
University of Ghana