Half of detained drivers in Ethiopia freed - UN - MyJoyOnline.com

Half of detained drivers in Ethiopia freed – UN 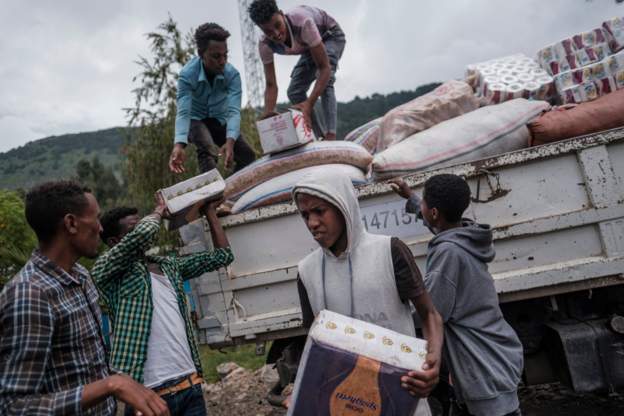 Millions of Ethiopians have been affected by the ongoing conflict

The Ethiopian government has released about half of the UN’s contracted aid drivers arrested last week, according to a UN spokesman.

At a briefing in New York, Farhan Haq said on Monday that 34 drivers had been released but 36 others were still being detained.

He hoped that the remaining contract workers and 10 UN national staff arrested by the authorities on Friday would be freed.

Their arrests of the UN staff and contract workers followed the federal government declaration of a state of emergency earlier in the month.

The emergency was declared as rebel Tigray fighters threatened to march on the capital, Addis Ababa.

On Monday, the UN spokesman also announced that the UN had released $40m (£29.8m) in emergency funds to Ethiopians.

“These funds will help scale up emergency operations in Ethiopia’s conflict-affected northern regions and support early response to the drought in southern Ethiopia,” the spokesman said.

Thousands of people have been killed and millions others displaced in the year-long war between the Ethiopian authorities and the rebel Tigray People’s Liberation Front (TPLF) fighters.