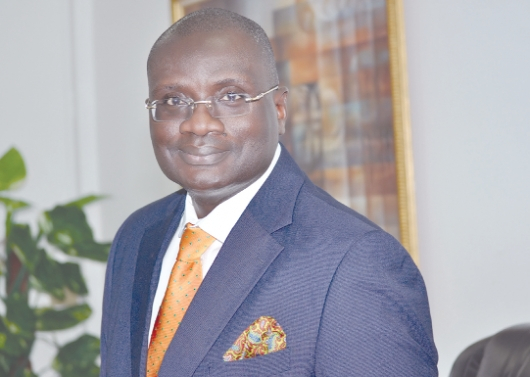 The Chief Executive Officer (CEO) of Bond Savings and Loans Limited, Mr. George Ofosuhene, did not grow up wanting to become a banker.

His childhood aspirations included possibly becoming a medical doctor, lawyer or pursuing a career in any of the other so-called elite professions.

Banking, in which he now has over 30 years of practical experience, was an afterthought largely inspired by his admiration of a particular banker.

"I was thinking of becoming a doctor but you actually get into school and as you progress, you realise that your capabilities are tilting towards a particular direction. I tilted towards banking in sixth form and the main attraction was a banker I admired who used to dress very well," the Bond CEO reminisced in his maiden appearance on the Springboard, the Virtual University, on Joy FM.

"I actually did not worry much about what bankers did but their appearance just fascinated me," he said, bursting in laughter.

Mr Ofosuhene, who was then schooling at St Peter’s Secondary School in the Eastern Region, said he quickly realigned his aspirations, redefined his life mission and rose through commitment and hard work to the current stage in his professional career.

One major lesson he learnt along the way was that a person needs to be clear in the mind what he/she wants to achieve in life or else their toil and sweat could amount to nothing.

"In life, you should have a clear vision and back it by action else you will become like the cotton wool which will be taken anywhere the wind blows it. I came to the realisation that what I would cherish as a profession was to become someone who dealt with figures. I clearly defined my goal and pursued it and I think it has been worth the while," Mr Ofosuhene added.

The appearance of the CEO of the Bond Savings and Loans on the Virtual University, hosted by Reverend Albert Ocran of Legacy & Legacy, a management consultancy firm in Accra, formed part of a series – the Leaders' Digest – which started on September 7.

The series features renowned leaders, heads of institutions and people of repute in society who share with listeners the secrets of their success and distinction in life, their core values and the lessons learnt from their respective areas of operation.

The sharing of their respective life and professional stories is expected to help motivate people and the youth in particular into pursuing their goals and passions in life. As part of the requirements of the show, each guest is often asked what three virtues define his/her professional and personal life.

On the three values that he cherished most, the Bond CEO mentioned trust, dependability and humility as the bedrock of his banking career and status as a leader over the years.

"Unlike other values, trust is personal. Considering the kind of business that we are engaged in, I always say that we come across so many things that if you actually decided to open your mouth too wide, you would always end up saying so many things that others don't need to hear. So you need to inspire confidence that you can be trusted," he explained.

Asked why trust was paramount, he added that, "You are actually asking people to entrust their wealth to you and before anybody will do that they will have to be assured that you are someone who can be trusted and so for me, trust is key."

Once concluded, the Virtual University team would collate and plot a graph of the most recurring virtues and attributes of leaders to be used as a guide by aspiring leaders in the country.

So far, humility and integrity have featured prominently as key virtues of the three guests who have appeared on the show.

His rise over the years

Its annual growth rate averaged 28.8 per cent as of last year. Shareholders' funds increased by 26.9 per cent to GH¢11.8 million and the company's name is virtually a household one among the business community and private individuals.

The remarkable success of Bond can partly be attributed to the leadership credentials and banking acumen of Mr. Ofosuhene, who has served as CEO since its inception in 2008.

His first banking role was with the Universal Merchant Bank, then known as Merchant Bank (Ghana) Limited, where he worked as a banking officer in the Corporate Finance department before shifting to the defunct Meridian BIAO Bank, which later became The Trust Bank (TTB) before it later became part of Ecobank in 2010.

"In 2008, I moved again and helped start Bond. So, if you look at it, I have been part of three start-ups in Ghana and the experiences have been immerse," Mr Ofosuhene said.

"One of the things that I have learnt throughout my movements is that anytime you moved, it did not matter who you had as a client; you had to market these clients all over again. Sometimes, you think that once you have moved on and the customer has become familiar with you, he/she will automatically follow you to the next job but it does not work out like that," he added.

The advise thereof, he said was for people to be able to properly package their products and market them to their prospective customers.

Just like any other leader, the CEO of Bond is consistently faced with the challenge of making decisions on the key issues that crop up daily in his line of work.

The ability to dissect the issues concerned to be able to quickly arrive at a decision, he said is key to the survival and success of every leader and the institution he/she heads.

This attribute, he said had been vested in him by his maker, God Almighty, thanks to  his series of constant communication with Him through prayers.

"What I always say is that I have a certain source of power and that source of power is the Supreme Being. “Every morning, I make sure I connect with God before I do anything else and this is the period I always ask God to give me the strength to take some bold decisions as and when the time comes," Mr Ofosuhene said.

Going forward, the Bond CEO said he would work harder to make the brand a household name in the financial services sector in the country.