Highlights: Minority on the state of Ghana's economy - MyJoyOnline.com

Highlights: Minority on the state of Ghana’s economy 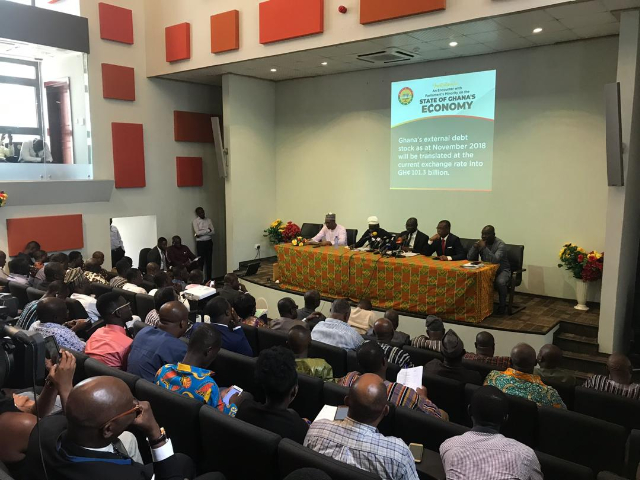 The Minority in Parliament has asked the government to immediately submit a fresh budget statement to the house, insisting the 2019 budget has been thrown out of gear by the depreciation of the cedis.

Minority spokesperson on Finance, Cassiel Ato Forson said investor confidence in the country’s economy is currently lost because of the falling value of the currency.

He told a media briefing in parliament house Wednesday the loss in value of the cedis is as a result of poor leadership.

Below are hights of the statement to the press.

1. The Ghana Cedi the weakest in Africa: The cedi/dollar exchange rate as at
3:04pm on 19th March 2019 stood at GH¢5.65 per dollar and GH¢5.60 per
dollar at Fidelity Bank Ghana Limited and Ghana Commercial Bank respectively.

2. We are tired of the propaganda ‘IGP’ approach to arresting the Cedi.

3. Government is compounding the woes of Abossey Okai spare parts dealers.
They are forced to pay double to clear their goods.

4. Importers are compelled to pay Special Import Levy and higher import duties
to clear their goods.

5. Importers whose duty payments have shot up astronomically are forced to
charge higher prices for their goods and service which has brought untold
hardships on the ordinary Ghanaian.

6. It has been reported on various media platforms, both locally and
internationally, that the cedi/US dollar exchange rate is expected to reach GH¢6
per dollar by the end of the third quarter of 2019.

8. In the last few months, Ghanaians have had to endure severe economic
hardships brought on by the misplaced economic policies of the Akufo-Addo
government.

9. Ghana has become a net oil exporter following the coming on stream of two
additional oil fields worked on by the Mahama Administration. What is the
Akufo-Addo government doing with huge oil revenue inflows that it cannot
manage our exchange rates?

11. The depreciation of the cedi can be attributed primarily to portfolio outflows
(as foreign investors repatriated coupons and principals) and a large current
account deficit mainly due to large trade service charges and interest payments.
The current account at end-December 2018 posted a deficit of 3.2 per cent of
GDP.

12. Government projected an overall deficit of 4.2 per cent of GDP (excluding
financial sector costs) for the 2019 fiscal year. This policy announcement is
sending negative signals to the investor community because it is inconsistent
with government policy decisions.

13. The proposed financing options for 2019 further give the indication that the deficit
level will exceed 4.2 per cent of GDP.

14. Government to add GH¢6.0 billion to the debt stock by issuing US$3.0 billion Eurobond.

15. The NPP government is about to give a guarantee to GNPC to borrow about
$250million for the government using royalties from oil revenue as collateral, which is
against the provisions of the Petroleum Revenue Management Act (Act, 815).

16. Government is also over-leveraging mineral royalties as collateral to borrow
$200million, which is against the Public Financial Management Act (Act, 921).

17. GETFund has also been given the guarantee to borrow $1.5 billion.

18. The government to borrow $2 billion from Synohydro by leveraging our bauxite
concession that is yet to be mined.

20. Question 1: Why would an independent central bank with focus on price
stability decide to reduce the monetary policy rate against its own research
findings that US policy normalization is strengthening the US dollar and causing
investors to move funds away from emerging economies and that upward
adjustments in domestic prices of petroleum products are likely to affect
transport and utility prices?

21. Question 2: Why would an independent central bank, with a focus on price
stability, decide to lower the policy rate in the face of dwindling net international
reserves and a rising interest rate abroad?

22. Question 3: Why would an independent central bank with focus on price
stability decide to reduce the monetary policy rate in favour of growth, which
has been projected to be higher than the previous year’s, while the local
currency is under pressure?

23. Question 4: Why would an independent central bank with a focus on price
stability decide to lower the policy rate in the face of excess liquidity in the
banking sector emanating from banks increasing their minimum paid-up capital
by over 100 percent, while the local currency is fast depreciating?

24. Question 5: Clearly, an economy cannot be externally unstable and internally
stable. How can a rapid exchange rate depreciation be accompanied with a
single digit inflation rate as captured by the posted macroeconomic indicators?

IMPACT OF THE CEDI DEPRECIATION

25. The depreciation of the Cedi has increased the cost of doing business. Domestic
businesses that rely on imported raw materials are compelled to pay more in
cedi terms for their raw materials.

26. The depreciation of the Cedi has made Ghanaian businesses less competitive.

27. More Ghanaian businesses have collapse and many more yet to collapse in the
coming days due to the weak performance of the Cedi.

30. Investor confidence is gradually weakening due heightened uncertainty, and
this is affecting the real sector.

32. The depreciation of the cedi has overburdened investors with unexpected cost,
as their cedi cannot purchase as much as before in the external market. This
has reduced their capacity to expand their businesses.

33. Government to use all hard-earned revenue to pay loans due to depreciation
of the Cedi.

36. Investors have lost confidence in the Ghanaian economy and this sending
wrong signals to the investor community.

37. How can economy be externally unstable and internally stable. Dr. Bawumia
stop faking macroeconomic indices to deceive us. What kind of economics
wizardry is this? Enough of the lies.

41. In barely 2 years, the NPP government has added GH¢80 billion to the public
debt stock.

42. Ghana’s total public debt now stands at GH¢201.8 billion and government has
nothing to show for it. NPP why? Nana Addo will soon sell us.