How farmers in Upper East are adopting Agroecology farming methods 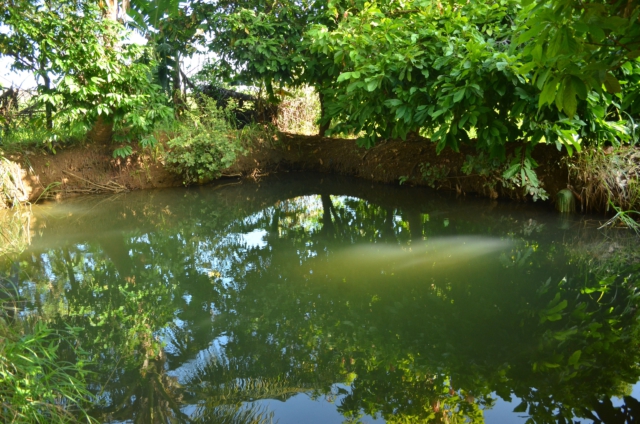 Imagine a piggery and a fish pond inside a crop farm: the piggery providing manure for the crops, the crops providing feed for the pigs and the fish, whiles waste water from the fish pond is used as fertilizer.

This is basically the cycle involved in agroecology – a farming system that is now being promoted by the Centre for Indigenous Knowledge and Organizational Development (CIKOD), the Peasant Farmers Association of Ghana and their partners.

With the emergence of chemical fertilizers and other new farming technologies, this method of farming may seem archaic but experts say it is the best way to produce organic food while protecting the environment at the same time.

Joseph Abarike has three gardens around his home at Kumbosco, near Bolgatanga in the Upper East Region.

Inside the gardens, Abarike has piggeries. He also has other livestock including guinea fowls, chickens, goats and cattle which freely roam the gardens or around his home.

Abarike also has a fish pond which he made from an old, abandoned swimming pool close to his home.

Now retired from the Ghana Red Cross Society, he has a lot of time to tend to his gardens which he says, are deliberately integrated with the rearing of his livestock.

“I have pigs, goats, sheep and a few cattle. So, I use their manure to grow maggots to feed the fish. Sometimes, I throw the cow dung or poultry droppings into the pond and that helps to grow micro-organisms like algae and the fish feed on these micro-organisms”, Abarike revealed.

He further explained that when the water in the fish pond becomes too saturated, it becomes a natural fertilizer.

“When the fish defecate and the organisms decompose, I pump the water out of the pond into the garden. And that helps in the growing of crops like maize and my vegetables”, he said adding; “When I harvest my maize, the cuttings are given to the pigs to eat so they basically grind it and give me their droppings which is natural manure. So, nothing really goes to waste in agroecology”.

Agroecology is based on applying the interactions between plants, animals, humans and the environment within agricultural systems. By doing this, it can support food production, food security and nutrition while restoring the ecosystem.

Abarike is a promoter of agroecology.

At the time of our visit to his farm, it was in the month of March – the hottest time of the dry season in this part of the country.

He had not been able to afford a mechanized borehole yet but had managed to keep some of his crops alive with water from a shallow borehole donated to him.

Abarike believes that his farming methods help him to produce healthier foods for his home and also to earn some income.

“I don’t use chemical fertilizer so the effects of chemicals [on humans] is reduced. So, if you buy from my garden, you will be eating good, organic vegetables”, Abarike said.

Fuseini Bugbon, is a farmer and also promoter of agroecology and organic farming.

Bugbon has a six – acre organic farm located at the Gundorg community in the Nabdam district of the Upper East Region.

On this farm, he grows a wide variety of food and cash crops including cassava, maize and pawpaw.

Just like Abarike, Bugbon also has a fish pond and rears livestock inside his farm.

He also believes that trees play a major role in organic farming.

“I have planted a lot of trees because when they shed their leaves, and they come into contact with the soil, it helps the soil to be active and whatever you plant grows well”, Bugbon said.

Bugbon also believes that the essence of farming should not be to grow just food, but to produce food “that people can consume and be healthier”.

And for him, his natural methods of farming which he learned and inherited from his late father, help him to produce purely organic food that have some health benefits.

Ibrahim Salifu’s “No Till” farm at Karimenga

Salifu uses a method he calls “No Till” on his on farm.

“Here, we practice just natural methods – a type of farming that is not expensive. The “No Till” farming which is very, very good”, Salifu said.

He also revealed; “We don’t really have to turn the soil so much because when you look at it, the nutrients the crops need are just at the top soil and not what is beneath. And you don’t need to do burning; you [instead] encourage mulching because you also need to consider the living organisms in the soil that help [in the growth of crops]”

And just like Bugbon and Abarike, Salifu rears livestock which provide him manure so he does not need to use chemical fertilizers.

Salifu said he has about 33 cattle which had gone grazing somewhere far away from the farm at the time of our visit. He however revealed that he gets tons of manure from the cow dung left in the kraal by these cattle.

The manure is conveyed to the farm, from Ibrahim Salifu’s kraal located about 500 meters away.

He then prepares composts on the farm by adding what he called a bio charge, which he uses to fertilize the soil.

Salifu mixes dry leaves and wastes from crops with the manure to prepare his compost but in between, he adds black soil from refuse dumps containing bits of charcoal. This was what he called which the bio charge.

“This bio charge is just from our normal ‘borla’ [refuse dump]. A lot of charcoal burning also takes place there so we collect the leftovers and mix them [in the compost]”, Salifu said.

“Bio charge is not a fertilizer but it is like a soil conditioner. So, it helps to give a really nice taste to the vegetables [planted on it]”, he revealed.

The benefits of Agroecology

All three farmers interviewed for this story believe that natural methods of farming such as theirs should be promoted by the government, to ensure healthy food, protect the environment and provide a source of income for farmers.

Ibrahim Salifu suggests that agroecology farms should be set up across the country so that students in various second cycle schools can often have practical lessons there. He believes this will help expand agroecology in the country.

“Students can go the farms to learn what the farmers do and not just stay in the classrooms because sometimes what you read could be different when you practice it”, he says.

Joseph Abarike says agroecology does not make use of chemicals like fertilizers and insecticides and therefore reduces the costs farmers incur during cultivation – a reason he says government must encourage and support agroecological farming.

“As a country, it will also help to reduce our dependency on chemical imports”, he says.

And Fuseini Bugbon says agroecology helps the country to have a healthier population because it produces organic food.

“What you get from this system of farming is healthier food as compared to conventional farming. When we say food consumption, it is not just the matter of eating food to be satisfied. It is rather to consume food and look healthier. But if you consume food and it affects your life, then you will spend a lot money attending hospital”, Bugbon says.

What experts say about Agroecology

The Centre for Indigenous Knowledge and Organizational Development [CIKOD] and the Peasant Farmers Association of Ghana are promoting the concept of agroecology.

They believe that this method because of its endogenous nature, ensures sustainable agriculture since farmers only have to rely on resources around them.

Executive Director for CIKOD, Benard Guri says in the country’s agriculture sector, one of the things government needs to look at is the basic resources available in the country and how farmers can use these resources.

“We have been talking about seed. What seed do we have in Ghana and how do we develop that seed?”, Guri asked.

He added; “We should look at that first and if we need help from somewhere to do what we are already doing better, then we can do that. Because if you look for seed outside [the country], there are companies that produce seed. They will bring it. But if COVID – 19 comes for instance, the borders will be closed and the seed cannot come again. Then what do we do?”

For him, this current government led by Nana Akufo-Addo has taken a bold step with the Ghana Beyond Aid agenda but it has to extend this agenda to include the basic things such as agriculture at the community level.

Experts who advocate for agroecology say it impacts positively on the environment and sustains biodiversity.

Dr. Kofi Boah also known as ‘Okuani Pa’ is the Founder and Director of the Center for No Till Agriculture. His center is dedicated to promoting and teaching the concepts of agroecology.

“Agroecology is what is going to ensure that you sustain the productivity of your piece of land; you impact positively on the environment”, Dr. Boah said.

He added; “Biodiversity is so much needed. So, when you have several crops grown in rotation [and] interspersed with strips of trees; be it naturally grown or consciously planted, you are creating niches; you are creating habitats for everything to come out. Therefore, you are promoting biodiversity”.

For Dr. Kofi Boah, if government is committed to ensuring food security in Ghana, then investments must be made to promote agroecology in the country.

He revealed that machinery is available to support large scale agroecological farming.

“The principles [in agroecology] are that we do minimal disturbance to the soil. And we have machinery; No Till planting systems that will just cut a slid through the mulch without ploughing the soil or doing much disturbance. And then there is machinery that will plant through. So, Agroecology can be done at large scale”, Dr. Kofi Boah revealed.

One thing is clear – organic foods are sought after all over the world.

For the advocates of agroecology, it remains for government and other investors, to support farmers, so that they can further improve on this system of African farming that has worked for centuries.