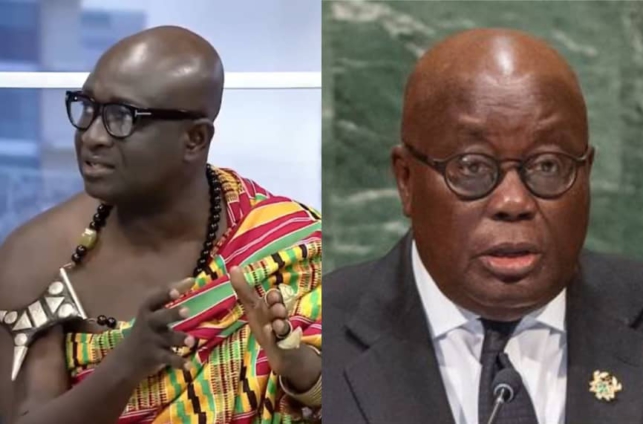 Media personality, Kwasi Kyei Darkwah (KKD), has alleged that the President’s inability to sack the Finance Minister could be due to an undisclosed indebtedness to him.

According to him, there is the need for Parliament to probe for any debt Akufo-Addo may be owing Ken Ofori-Atta.

Wondering why the President has not been able to sack his cousin- the Finance Minister, KKD said Mr. Ofori-Atta has performed abysmally in office and does not deserve to be at post.

“Ken must go. Ken must go…How much money do you alone want to have? Why? Databank alone, how many of your staff are in government at the moment?”, he quizzed on the AM Show on Monday.

“How much money does Nana Addo owe you? In fact, Parliament must ask this question … I think the President owes him.

“Because if the President doesn’t owe him, what is it that is so beholding to this gentleman that with what he’s done with our economy, he is still allowed to be at post?”, KKD wondered.

The concerns by KKD add to the litany of calls urging the President to fire the Finance Minister.

Over the last couple of weeks, these calls have become rife across both social and traditional media, with many accusing the Finance Minister of steering Ghana’s economy into a ditch.

Ghana’s economy is presently reeling under pressure, with a decline in macro economic indicators.

From a consistent rise in inflation to a fast depreciation of the local currency, many citizens are of the opinion that the Finance Minister does not deserve to remain at post.

Meanwhile, President Akufo-Addo says the Finance Minister has performed to his satisfaction, hence there is no basis to sack him, pleading only last week for him to remain at post until negotiations with the IMF are concluded and the 2023 budget presented.

DISCLAIMER: The Views, Comments, Opinions, Contributions and Statements made by Readers and Contributors on this platform do not necessarily represent the views or policy of Multimedia Group Limited.
Tags:
Akufo-Addo
AM Show
Economy
IMF
Ken Ofori-Atta
KKD
Kwasi Kyei Darkwah (KKD)