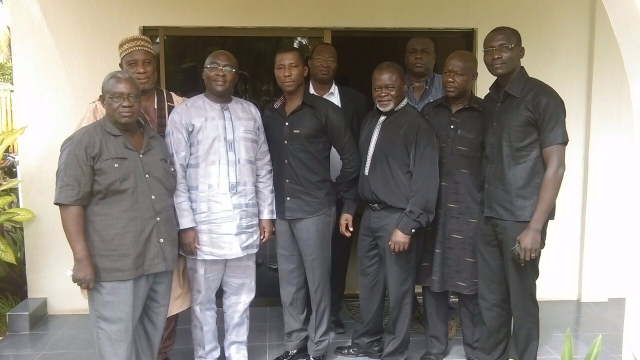 Inspector General of  Police ( lGP) John Kudaloh and Mahmoud Bawumia  have  expressed  their deepest condolences  to former Asante Kotoko board member Kennedy Agyapong ( Kenpong) on different platforms on the death of his mother Janet Yaa Biamah.

The top but humble security capo sympathized with  the businessman who  was in the company  of  boxing icon Azumah Nelson at his (IGP) office in Accra on Friday.

He pointed out that  "This indeed is a great loss, but all I can say is to take heart, and may God grant you and the entire family the strength to go through this period.

"Thanks for taking time off your busy schedule to inform me of the loss, I will be there myself and ensure that both the Nkawkaw and Mpraeso Divisions are fully represented."

And as custom demands, he presented a bottle of strong drink to officially announce and invite him to the funeral.

The highly-respected Kotoko enthusiast in response expressed  thanks the IGP for his kind words and assurance.

In like manner, Dr Bawumia said  "It's a major loss for you. May God give you the strength to deal with the situation. Your mother has raised a successful son. On 28, l will be there to support you to the fullest.

“l am highly honored to have dignitaries like you in my house. This will certainly be the mother of all funerals.”

The Kenpong Group boss and his entourage also called on  the Eastern Regional Minister Ms Mavis Ama Frimpong at her office on Thursday, who promised to attend the funeral.

Kenpong indicated that "I also want to thank you so much on behalf of my family for your warm and exceptional reception."

He said after the tour that" I want to thank all these great personalities for allowing me into their homes and offices. It's been tiring though, but I am looking forward to give our mum a befitting funeral."

The deceased, who passed on few months ago would be buried on May 28 at Mpraeso, Kwahu in the eastern region.

She left behind seven children and a husband Jacob Agyapong.