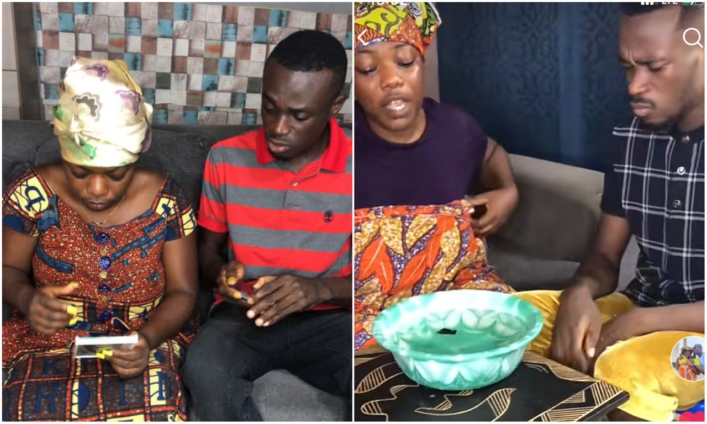 Though that zeal has died down, sports wrestling used to be my thing growing up. I would watch a whole episode of WrestleMania and replicate it in our backyard with my friends, while playing our favorite characters.

In my primary school days, 20 minutes to the closing bell was another opportunity to get into our element, and guess what?

The desks were rearranged in a ring from, which we flew onto each other while making taunts as our favorite WWE wrestlers would do; and of course, I was Rey Mysterio for acrobatic reasons but that’s a story for another day.

🔥#InfluencersBlock is back tomorrow, this time with your favorite TikTokers, Kofi Ne Ama.🤳🏾😂In this episode, @KofineAma1 also opened up to me about their relationship beyond the camera.
Out on https://t.co/aEqAi0Hj8A this Friday.

Only if my mother knew the reason I had dirt and scars on my body even on a Monday, a day definitely not scheduled for Physical Education (PE).

She occasionally joined in the couch on Sundays when I bolted right after church to the house. I loved it. I mean I loved when she sat still and just observed until John Cena showed up.

For some reason, I always knew he would emerge the victor in most cases. But the beatings he took every single time, brought out the drama in my mother.

Emotional as she is, she would scream each time The Champ was slammed against the floor and shout at the TV consistently. Yet, she would stop my attempt to change the channel to avoid all this drama.

Ironic right? I would be fuming at this point but I didn’t own the television; so, what choice did I have?

That is why this video I found on TikTok via the handle, Kofi Ne Ama brought these memories running back through my head.

Two duo are carving a niche for themselves in the video microblogging platform.

They had perfectly re-enacted my childhood in an under-30-second video and many other mother-child encounters which are very relatable to the average person who grew up in a Ghanaian setting.

There are certain traits that cut across African mothers. No matter how we detested some of those relationships, it provided storylines for some of the most hilarious stories you’ll ever tell.

That is the narrative that Kofi and his mother, Ama, seek to tell as demonstrated to their 176,000 TikTok followers.

For Ama, who grew up under the roof of a single mother, her circumstance couldn’t have been more precarious.

But Ramatu Dauda Muhammed, as she is known in real life, tells me in this interview that it is a blessing in disguise.

Rather than brood over being abandoned by her father at a tender age, she looked at the glass as half full.

“My mum was a trader. My dad was just at Suhum but he never came to us. I was cool because my mum always worked hard to provide our needs,” said the young actress who hails from Apedwa in the Eastern Region.

“I thank my father for leaving us. I wouldn’t have gotten these stories to tell to entertain people as I do with Kofi now,” she told me in an interview.

She struck me as a calm person up close. The vociferous and aggressive persona she showed in the videos was nowhere to be found once she was out of character.

She made this revelation as part of a new series dubbed Influencers’ Block on Ghana’s premier new hub, Myjoyonline.com.

The series is a new bi-monthly article geared towards throwing the spotlight on content creators who have made a name for themselves on social media.

Kofi on the other hand has been at the receiving end of attacks at the hands of Ama’s pink rag.

Though my family may disagree, I was not that stubborn growing up but I could see myself in him whenever he provoked the hell out of his mother in the videos.

From enduring surprise beatings at dawn for the earlier day’s sins, to ducking from getting hit by any utensil within his mother’s reach amid insults directed towards his non-present father.

If you didn’t grow up in a low-class African home, I apologise if you cannot relate parts of the skits.

But Kofi, born Hayford Korankye, had a different experience growing up – a little smoother path in Kyebi than that of his co-actor and girlfriend.

However, the chemistry between the two is evident from the jump.

The story of how they met is a very interesting one as you would find out in the video link attached to this publication.

Growing up, Ramatu had a dream of being an actress. But after a number of unsuccessful auditions and conditions which she did not find favourable, she decided to give patience a chance.

On the advice of Kofi, she took a break from the search to focus on other things.

This break would prove crucial as Kofi, who also aspired to be an artiste manager, would continue to provide guidance on the possible directions they could go.

The two have been in a love relationship for a while now, within which period the duo have nursed their aspirations on the low.

But one day, Ramatu had a weird request for Kofi. He was not enthused, because previous amateur skits they had tried did not gain any traction.

She set up her phone camera and asked Kofi to fasten the zip behind her dress, just like the sole life career African mothers brought their children into this world to pursue.

Kofi reluctantly closed it for her amid her usual rants and the video was uploaded.

That was how they struck gold. The video which was created on January 5, 2022, became the blueprint.

“When I saw the comments coming, I was like wow then let’s keep going. Because people kept commenting like ‘ei Kofi, this is like me and my mum oh,” he explained.

After just four months down the line, they have become a household name in the influencer space with audiences all over the court and in the diaspora.

According to them, they are sometimes overwhelmed by the reactions and the love shown them anytime they put out content.

A close look at their videos shows that it is not heavily edited; hence, a pure display of authenticity and innovation in producing skits which now have a global reach.

On that note, the content creators hope that well-wishers support them with some gadgets such as a camera among other things to make their videos meet the standard that their audience craves.

Finally, the two are firm believers in God’s timing and wish to, one day, get cast into major roles in movie and television shows, which will take their skills to the next level.

“When it’s not your time, you can even act better than Agya Koo but it won’t get anywhere,” Kofi added.