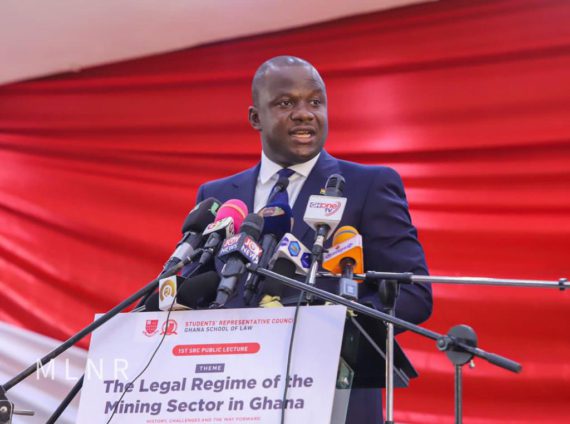 The Minister for Lands and Natural Resources, Samuel Abu Jinapor has called on all stakeholders of the mining sector to put hands on deck and ensure proper regulation of the sector.

The Minister is of the view that the mining sector cannot be properly regulated if all stakeholders do not discharge their duties with integrity and transparency.

He said this while delivering a keynote address at the first Student Representative Council (SRC) Public Lecture of the Ghana School of Law, held at the Kwame Nkrumah University of Science and Technology on Friday, December 10, 2021.

“We cannot regulate illegal mining if for example the inspectorate division of the Minerals Commission cannot monitor the operations of mining or do their work on the principles of integrity and transparency.

“We cannot regulate this sector if the Minister, Deputy Ministers and officials of the Ministry who have the responsibility to offer supervisory duty do not do so on account of integrity.”

Mr Jinapor, however, opined that, it will only be possible to sanitize the mining sector if all authorities involved, work together in courage.

He said “we can only get to the right conclusion in respect of sanitising the small scale industry, if we work, all of us, Minerals Commission, the Minister, the Deputy Ministers, the Ministry, work in the spirit of integrity and courage, that is the only way forward.”

Speaking on the theme “The Legal Regime of the Mining Sector in Ghana – History, Challenges and the Way Forward”, the Damongo MP gave the assurance to continue the fight against illegal mining with the realisation of the President’s vision in mind.

“The Ministry of Lands and Natural Resources and I are determined to continue to work tirelessly to construct a lands and natural resources sector which is effectively managed, transparent, and anchored on integrity, thereby, contributing to the realisation of the noble vision of the President of the Republic, H.E. Nana Addo Dankwa Akufo-Addo,” he said unequivocally.

He also disclosed that in view of this fight, an amount of GH₵20 million has been allocated by government in the 2022 budget to help in the fight against illegal mining popularly known as “galamsey.”

According to Mr Jinapor, as part of efforts to encourage and promote responsible small scale mining in the country, the Minister said, the Ministry has instituted a Responsible Small Scale Mining Awards scheme.

He said the scheme which will have it’s maiden edition held on Wednesday, 22nd December, 2021, will from this year, be an annual event “to reward Small Scale Miners who adhered to the health, safety and environmental standards of mining”.

In his submission, the Lands Minister also highlighted some challenges within the mining sector.

They include: the lack of value addition, over concentration on gold, and environmental hazard which he said is as a result of lack of personnel to provide supervision from agencies such as the Environmental Protection Agency, who have oversight responsibility in protecting people and the environment from significant health risks, developing and enforcing environmental regulations.

He, therefore, called on tertiary institutions across Ghana to come up with higher education in mining to ensure and provide well resourced graduates who with their qualifications and knowledge, can help better the industry.

The Minister intimated, that after all is said and done, the mineral resources of Ghana are the property of the people of Ghana vested in the President as a trustee and therefore “government has an obligation to ensure that the exploitation and utilisation of these resources benefit the actual owners of the resources; the people of Ghana”.

On his part, the Chairman of the Public Lecture and Director for Legal Education at the Ghana School of Law, Mr. Kwasi Prempeh – Eck, expressed his profound gratitude to the Minister for such a detailed and well presented lecture.

He added that he is very much impressed and proud of the Minister for all he has been able to achieve through the Ministry, saying that “Mr. Jinapor has proven to be a man of his words and so he is certain that very soon, Ghana will see more developmental initiatives from the Lands Ministry just as the Minister has assured.”

The SRC President of the Ghana School of Law, Mr. Wonder Victor Kutor in his remarks, applauded the efforts of government in the mining sector. He further added that as part of the yuletide season, the Ghana School of Law has made arrangements to pay the fees of some students in need in some selected institutions.