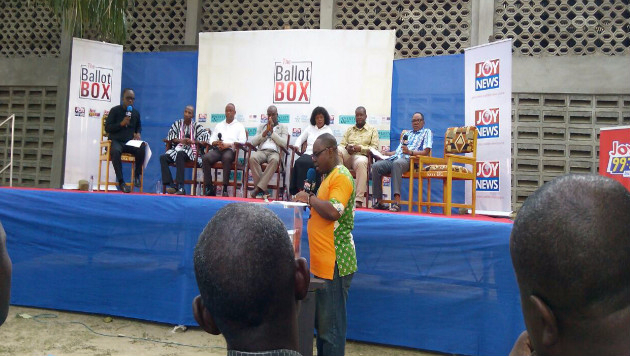 Residents of Adaklu in the Volta Region who partook in the Joy Ballot Box program Friday singled out road infrastructure as most important issue to them.

According to those who said they would vote in the upcoming election, they emphasized that their vote would be dependent on the candidate who is able to solve their teething problem of water problem as well as the unemployment.

A number of residents also said they have given up on voting, as years of voting have not brought any significant transformation in their lives.

The Adaklu-Anyigbe District was one of the 18 districts in the Volta Region. Its capital and administrative centre was Agortime-Kpetoe.

According to the report, the Poverty incidence in the Volta region is the highest (89.7%) followed by Kadjebi (66.8%) and Agotime Ziope (62.1%) districts.

The depth of poverty for Adaklu (46.9%) and Agotime Ziope (30.1%) are high compared to the other districts.

However, Kwame Agbodza, and Mr Sky Ganaku questioned the timing of the survey stating that the Adaklu District came into being in 2012/13 and the data was collected in over the period of 2010.

Mr Sky Ganaku said his difficulty to accept the report is the relativity of the Statistical Service use of the word poverty, although he was willing to accept the term underdeveloped.

Arguably the most important concern for many of the residents, Mr Agbodza, explained that as they have been having issues of contractors leaving site and also procurement and costing took time.

He cited the road between Akwetey and Waya, which he said has been awarded on contract adding that the road networks in the District as well as Ho in general were all being worked upon approval on July 13.

Mr Agbodza, said it is problematic to say that the government didn’t do anything in that regard when the New Patriotic Party was in power for eight years yet failed to do anything in fixing the problem.

But Dr Samuel Bueme rejected this assertion arguing that the former Minister in the late Atta Mills government was an indigene of Adaklu but did little in fixing the situation.

Mr Agbodza, said he has met with the Feeder Road National Director to on the roads, which was questioned by the NPP man as wanting to know why government waited till election time before waking up to its responsibility.

In a rather dramatic move, the Queen mother of the area brought along bottled water from river Togi brought a sample of the water they drink to show all.

She said the water that looked reddish in the bottle was salty water and pleaded that whomever they will vote for must fix their water problems.

Another resident said they have been promised on several occasions that water will reach their end but it never has adding that they are not rich to buy bottled water.

Dr Bueme said plans are far advanced to bring from Ho, specifically from Aboade to Waya.

He related that he has written several letters and organized forums on the issue, but it has delayed in coming because the authorities are not settled where to source the water.

But the MP explained that the water coming to Ho is not enough to distribute to other areas in the Adaklu District.

He said he has spoken to the Ministry of Works and Housing to help in fixing the problem.

Most of the young people who spoke at the forum complained about their joblessness state although they claim to have different educational qualifications.

The parents who spoke on the subject said they want to help their children to go to school and stay at school and make them happy.

A lot of children are said to have dropped out of school in the District and Region because they help their parents.

Mr Kwame Agbodza said he had no doubt about the unemployment state of the District and the Volta Region as a whole, but one of the biggest problem in the world currently is helping the youth to be gainfully employed and happy.

He said he has been paying for scholarship from the Common Fund but insisted with the District recently being separated from Adaklu-Anyigbe.

According to him, he has been encouraging the youth to go into agriculture, the reason for which he disclosed he bought a tractor to plough for those interested in farming for free.

He also added that MASLOC has given some women money to work with and pay back.

Mr Gaewu restated Nana Akufo-Addo’s one-district one-factory policy and outlined the prospects it has for the District and Region as a whole.

According to him, there was no point in the culture of educating the youth without guaranteeing them jobs.