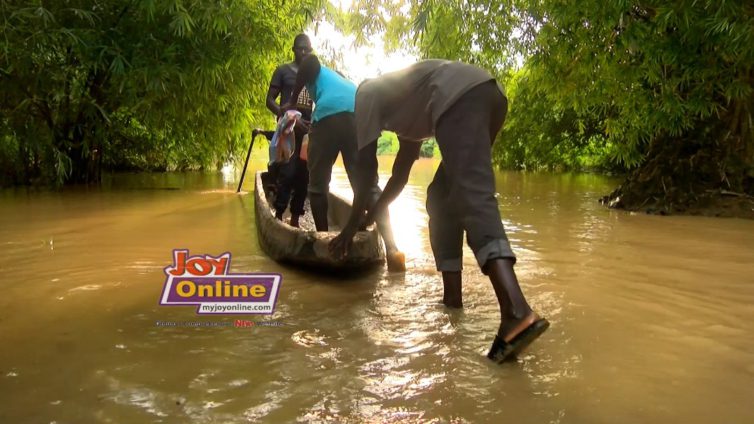 JoyNews Features Editor Joojo Cobbinah and the Institute for Human Rights and Development in Africa (IHDRA), an NGO, have sued government over its failure to ensure girls are not barred from crossing the River Offin on Tuesdays.

They are determined to put an end to this long-standing discriminatory practice.

They have banded together and filed a joint lawsuit against the Ghanaian government for allowing archaic cultural practices to continue and failing to protect girls’ right to education.

The case has been brought before the African Committee of Experts on the Rights and Welfare of the Child (ACERWC), for allowing gender-based discrimination against girls residing in Ashanti villages and Central regions along River Offin.

For several decades, women and young girls have been forbidden from crossing the river Offin during their periods, as well as on Tuesdays, because the gods of the river forbid it.

Many young girls along the river are forced to miss school during their menstrual cycles and on Tuesdays.

In this public interest case, the applicants argue that while boys have no inhibitions to cross the river, girls have to stay home till their menstrual cycle ends.

It is believed that if a woman or girl violates this custom, she will be carried away by the river or die; otherwise, they must offer certain sacrifices to appease the river god.

Besides the fact that this restriction causes girls to lag in studies, and has forced some to drop out of school, the restriction accentuates the risk of poverty, early marriages and child exploitation among girls, not leaving out the risk of drowning while crossing the river to attend school.

In addition to being a violation of sexual and reproductive health rights, the Applicants contend that the restriction constitutes gender discrimination and a violation of girls’ right to education.

In an interview with Joojo Cobbinah, he stated, “the story has been told several times.”

“The story develops, we make noise about it, it ends, and we move on to other things. This time, we want the court to compel the government to work. I hope that the combination of journalism and the law will force the government to act.”

Speaking after the filing of the case, IHRDA Executive Director Gaye Sowe also said, “We have personally spoken with a good number of girls, parents and school authorities in the concerned communities, and have been able to assess the seriousness of this problem…

“This case is not just about advocating for girls’ right to education but also about ensuring equal opportunities for both girls and boys, and a better future for all children”.

The Applicant based their suit on Article 11 (3) of the African Children’s Charter urges member states to take measures to encourage regular attendance at schools and the reduction of dropout rates and also take special measures in respect of female, gifted and disadvantaged children, to ensure equal access to education for all sections of the community.

The Applicants contend that the Government of Ghana is aware of the problem, with several civil society, and media reports on the issue available in the public domain, but has failed to fulfil repeated promises to build schools in the affected Ashanti communities as a step toward resolution.

In 2018, for example, Joynews interviews the then Deputy Education Minister, Dr Yaw Osei Adutwum and he promised that the Ministry will take the issue up so school children would not have to cross a river to go to school.

As a result, the Complainants argue that government has failed to protect girls from gender-based discrimination, as protected by the Constitution and the African Charter on the Rights and Welfare of the Child, among other international human rights legal instruments to which Ghana is a State Party.

The Applicants are requesting that government take special measures to ensure that the affected girls have access to education.

Also, the complainants want government to construct a bridge to facilitate access to education for the affected girls.

Joy News checks at the ACERWC show that the state has been notified of the suit.

DISCLAIMER: The Views, Comments, Opinions, Contributions and Statements made by Readers and Contributors on this platform do not necessarily represent the views or policy of Multimedia Group Limited.
Tags:
Joojo Cobbinah