Kabral and NMC honoured for role in national peace - MyJoyOnline.com

Kabral and NMC honoured for role in national peace 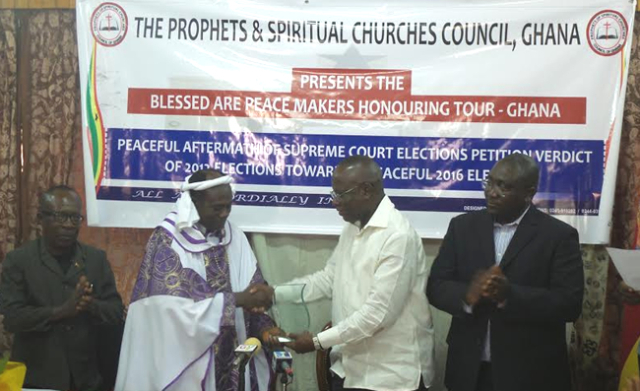 The Prophets and Spiritual Churches Council (PSCC), on Monday honoured Mr Kabral Blay-Amihere; Chairman of the National Media Commission (NMC) and the 18 members of the commission, for the role played in ensuring national peace.

The commission was lauded for setting the right standards for the media, which kept the country united and peaceful during the nine months election petition by the main opposition New Patriotic Party.

The council has embarked on what it termed “Blessed are the Peace Makers Tour” to hounour distinguished individuals and institutions. It is on the theme:” Peaceful Aftermath of Supreme Court Elections Petition Verdict of 2012 Elections towards Peaceful 2016 Elections”.

Mr Kabral was given a citation/plaque and Bible whilst the NMC was offered a citation, Bible and Koran. The two holy books were symbols for inter-faith dialogue.

Prophet N’akoa Nazareth Ansah Jamson, Spiritual Leader of the PSCC said members witnessed the excellent role the NMC played before, during and after the Supreme Court verdict of the elections petition.

“It was a delight to see the depth of communication skills, knowledge and innovative ways the commission exhibited during such crucial times in the history of the country and this was truly worth applauding.

“We are confident that you will keep the good works in the service to mother Ghana… By your (Mr Blay-Amihere) leadership skills your institution did not only make peace but you defused tension, before, during and after the Supreme Court verdict of the 2012 Elections Petition,“ he said.

Mr Joseph Baah, General Secretary of the PSCC said the council has embarked on an inter-faith approach for national unity and development, which has led to a courtesy call on the National Chief Imam, the Catholic Bishops Conference and the Christian Council of Ghana.

He noted that since 1992 elections have been characterised by the phenomenon of tension, “pregnant with scary moments”.

“Matters got to a very explosive stage, when a contestant party in the 2012 elections refused to accept the result of the Electoral Commission and headed straight to the Supreme Court to overturn the verdict,” he said.

Mr Blay-Amihere who expressed joy for the awards on his behalf and on behalf of the NMC said members did their national service not having in mind that they would be rewarded one day.

He said within the last six years, members worked to fulfill their mandate, which included setting high standards for the media and promoting press freedom.

Mr Blay-Amihere said the feat could not have been achieved, without national peace and stability and was hopeful that the NMC set the hallmark in 2012 through collaboration with stakeholders like National Communications Authority, Ghana Police Service and National Security.

He said during the nine months election petition Ghanaians voted for peace and not violence and as a commission members would strive to ensure that the media sticks to the ethics of the profession.

“I hope the structures we have built will remain intact to ensure peaceful elections in 2016.”

The NMC Chairman asked the media and the political parties to strive to determine the benchmark for peaceful democracy as Ghana had remained a beacon of hope for Africa since independence.