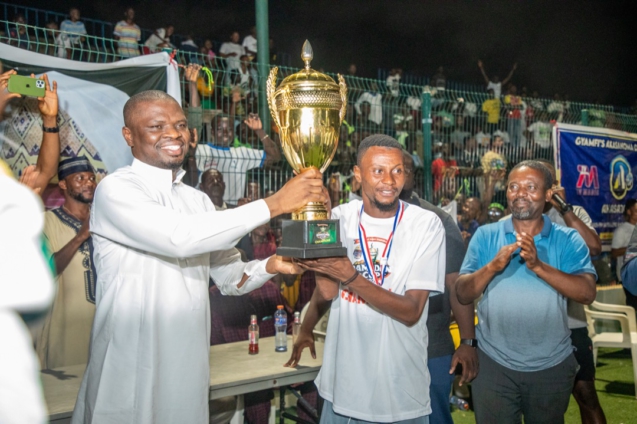 The contest which ended zero-all in regulation time, saw Kasoa win 4-3 via penalty shootout to proved their superiority as a powerhouse of football among Zongo communities.

In a thrilling 28-team, two-day soccer festival at the Sharubutu Complex at Fadama in Accra, the Central Regional side swept all their opponents aside to lift the trophy for the second time in the tournament’s history.

Kasoa, who won the trophy last year began the defence of their crown with an emphatic 2:0 win against Tema, before brushing aside Nungua Zongo, Ofie Akuapem Zongo and Cowlane in the second round, quarter finals and semi finals respectively, enroute to the finals against debutants Kaneshie Night Market, a Zongo located between New Fadama and North Kaneshie.

The Night Miarket Community team, got a wild card into the tournament after Northern Region’s Yendi could not show up on Saturday due to circumstances beyond their control, but the late entrants proved turned out to be the revelation of the tournament after fighting their way to the grand finale.

Despite the home crowd roaring in support of the home team, Kasoa proved too difficult for Kaneshie Night Market in the finals, which ended 0:0 in normal time, and 4:3 on penalties.

The finals attracted personalities, including the Minister for Youth and Sports Mustapha Ussif, Chief Executive Officer of the Zongo Development Fund, Arafat Sulemana, sports icons and representatives of the National Chief Imam.

The Minister of Sports, who handed over the trophy to the winners, commended organisers of the tournament’s for the onsistency of the competition since its inception in 2015.